Roth C: Wake up and smell the fungus

IT'S WHAT GOES ON IN THE BUCKET THAT MAKES THE DIFFERENCE 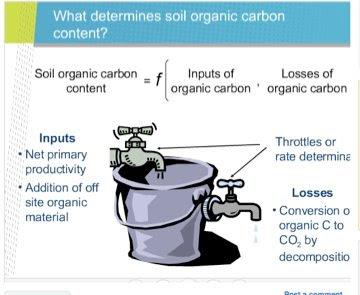 A series of articles in the latest Australia Farm Journal call into question the usefulness of the Roth C model (in its current configuration) for predicting the soil C performance of soil. it ignores the contribution of microbial communities. The articles take a long look at "The hidden costs of soil carbon" - a short paper by 5 CSIRO scientists which 'proved' that landholders could not afford to grow humus because of the cost of Nitrogen, Phosphorous and Sulphur inputs. The paper was based on a premise that is widely believed in soil science community: that the carbon sequestration potential of a soil is limited to the amount of organic matter added, ie. stubble retained, manure spread "The current configuration of a soil carbon model called Roth C suggests there would need to be 20 to 30 tonnes/ha/yr of biomass input to achieve the higher carbon sequestration rates we have measured under some perennial grasses in the Northern Ag Region of WA.," says Tim Wiley from the Department of Agriculture & Food, WA. But, while putting on an additional 16 tonnes of soil carbon/ha under perennials (vs annuals), the measurements of above ground biomass have been only 10 tonnes/ha/yr. Had the hypothesis of the CSIRO paper been right, there should have been a shortage of plant available Phosphorous under the perennials, with the extra tonnes of carbon sequestered binding more than 300kg/ha. But plant available P increased by 43kg/ha. This increase in P was also experienced by Scott Macalman at Warren.

If Tim and Scott and Christine Jones's results are right, then the CSIRO Paper is misleading. Yet it was sent to 37,000 growers by the GRDC as part of its sustained campaign against the idea that farmers could ever be paid for growing soil carbon. The paper reveals that the analysis did not take into account the emerging knowledge of soil microbiology. (Some would say it's been around for years. But it has been ignored in favour of chemistry and physics.) It assumed that there could be no other source of nutrients than a bag from a fertilizer company. The formula for humus means you need 60kg of N, 12kg of P and 9kg of S for every tonne of humus you make. One of the paper's authors used this additional nutrient requirement to call into doubt Col Seis's 2% increase in soil carbon over 10 years. We blogged the initial response in September when the item appeared in "GroundCover", which usually has an anti-soil C sequestration article in each issue. But we also reported the huge natural source of nitrogen: the sky, in a blog in June last year. Attached below is the evidence we supplied at the time:

Free-living nitrogen-fixing bacteria and symbiotic fungi can release and make available to plants vast amounts of the N, P, and S locked up in the soil after years of over-application of fertilisers. A CSIRO Fact Sheet says: "We know the current amount of nitrogen fertilizer applied per year is about 100 Megatons of nitrogen. However, we do not have an accurate knowledge of the amount of nitrogen addition through nitrogen fixation, although estimates are between 50 and 200 Megatons of nitrogen per year."(1) A NSW Department of Primary Industries fact sheet says, "Rhizobium bacteria ... can fix 100kg of nitrogen per hectare per year." (2)

In 1998, a CSIRO team claimed that Australian agricultural soils may be holding up to $10 billion worth of phosphorus, as a result of fertiliser applications. "The rural industry spends $600 million each year on phosphate-based fertilisers, yet often only about 10 to 20 per cent of the phosphorus is directly used by plants in the year it is applied," said CSIRO Plant Industry researchers Dr Alan Richardson and Dr Peter Hocking (3). "The remaining phosphorus becomes locked-up in the soil," he said.

If the right bacteria and fungi are present, more nutrient means more growth, which means more microbial activity and more biomass to enrich the soil. "When phosphorus is scarce in soil, plants that have developed mycorrhizas on their root systems have greater access to and take up more phosphorous than others," according to the University of Western Australia's Soil Science Department.(4)

The belief that only by introducing organic matter from outside the system can organic carbon grow seems to dominate thinking in high places. But wasn't it superseded long ago? “Numerous studies have shown that the introduction of strains of [bacteria] into the rhizospheres of cultivated plants led to significant increases in grain yield as well as total dry matter... The stimulations observed are most likely due to the production of growth hormones by these bacteria." (5)

Soil organic matter (SOM) can supply much of your Nitrogen needs. “In cropping systems, as much as 50%-80% of the N can be supplied from SOM and nearly 100% of the N in native ecosystems,” writes Professor Charlie Rice in his book Soil Carbon Management. This percentage represents11-300kg N ha-1 for a crop*. At $1500/tonne for nitrogen fertiliser, this transates intoa value of $16.50-$450/ha/yr.

How can this be? Well Nitrogen, like Carbon, is mobile. It cycles. Most N in soils comes from the air and is absorbed by micro-organisms associated with legume plants. N is fixed by legumes and stored in the soil in organic forms, to be broken down by other microbes – via two processes: mineralisation and nitrification, via which it is transformed into ammonium and nitrate.**

Former NSW Department of Agriculture agronomist Adam Wilson told The Land that the best way to build up a N bank is to add carbon to soils. Management that builds C also builds organic N because both oproceses rely upon interactions between rootmass and microbes. He recommends adding organic carbon via composts, green manures or planned grazing, avoiding highly alkaline fertilizers which burn up C and humus, minimum tillage, and a legume or pasture rotation.***

Email ThisBlogThis!Share to TwitterShare to FacebookShare to Pinterest
Labels: T