The markets for soil carbon

There have emerged 2 distinct markets for soil carbon in Australia: 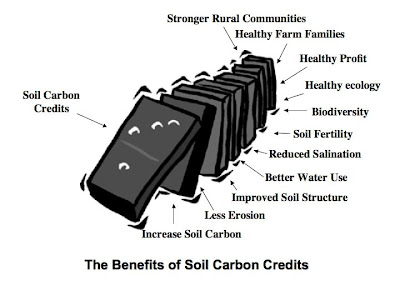 There are two more dimensions in the market:

1. The wholesale market:large volumes of offsets made available by operators who can demonstrate that they have prevented emissions by developing renewable energy projects or who can demonstrate that they have 'sequestered' CO2.
2. The retail market: companies and organisations that invest in offset projects and then sell off portions of the emission reductions in relatively small quantities with a mark-up.

The image/"meaning behind the source"/emotional content of an offset - such as a solar energy project in a underdeveloped country - can add make it more valuable to the buyer. By 'bundling' benefits into the offset package, promoters can create what is called 'gourmet' carbon. Naturally these offsets can command a higher price.

The retail market is currently quite small, but is growing rapidly. Several service providers have reported a doubling of sales each year for the past two years.

The majority of retail providers adopt self developed standards and
verification procedures, rather than following the CDM and Gold Standard guidelines.
Voluntary markets are largely unregulated. 'Voluntary markets can maintain environmental integrity without the precise quantification, unambiguous ownership requirements, and in-depth M&V protocols required of compliance markets," says Dr. Mark Trexler whom we met in Washington last October. "The voluntary market has the flexibility to encourage innovation. It may be able to provide the most benefit to small-scale projects and technologies that the regulatory market tends to overlook (either because the projects fail to meet a required threshold or because they are too small to bear the high transaction costs often associated with regulatory offsets)," he says. Dr Trexler is the president of Trexler Climate + Energy Services, Inc., an energy and environmental policy consulting firm based in Portland, Oregon.


Prices vary enormously, from US$5 - US$35 or more per tCO2e. Brokers generally charge a 7.5% commission. Websites generally have a carbon calculator, where individuals can calculate emissions from flying, driving their cars, or their total yearly emissions.

"Sustainable development benefits of projects on offer from retail providers vary from projects with little benefits to local communities, to projects in which communities are key participants, to projects that address biodiversity and communities," says Nadaa Taiyab of the International Institute for Environment and Development. The majority of retailers appear to focus on forestry projects.
"Buyers if voluntary offsets are not buying a ‘product’ so much as they are giving to a cause. The calculation of carbon emissions is simply a way of defining the size of their contribution," she says. They are paying for a service: not just the offset, but also access, convenience, and quality assurance.

√ The first voluntary transaction occurred in 1989 when US power company AES Corp. invested in agroforestry projects in Guatemala.
√ The start-up capital needed to register a project for the mandatory compliance carbon market can be beyond many projects. Voluntary projects avoid these bottlenecks.
√ The market for voluntary offsets is estimated to have doubled between 2006 and 2007 to 100 million tonnes. 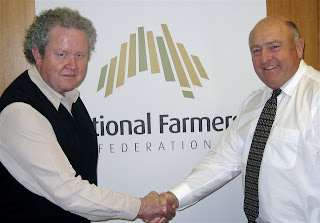 **This is not true. Demand for energy has pushed Australia well past its target emission limit which itself was set very favourably by the Kyoto negotiators seeking to get Australia to support the scheme.
Posted by Michael Kiely at 7:55 AM 2 comments: 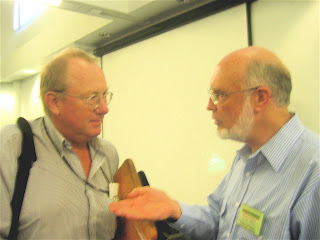 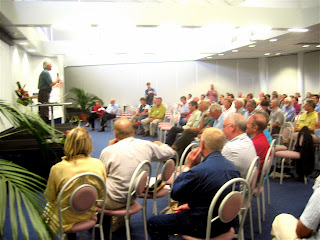 But he's not just all left brain. He has that special right brain intuition that few others have - Christine Jones is one - of just feeling that a farm is in synch or not, no matter how good or bad it appears. His was a special session and he is a special man. Other highlights for me were Cam McKellar's presentation on his biological farm near SPring Ridge. (I've asked Cam for one of his photos.) And Dr Lukas van Zweiten who prefaced his presentation on biochar with the immortal pronouncement that Australian soils are too buggered (my words, not his) to store much carbon (hence we must buy char) which raised my hackles, but we chatted later and he promised to send me some information. The New England looks a picture and we yearn for it still (we met in Armidale and lived there for several years). There's plenty of soils carbon growing under the pastures northeast of Armidale, I'll bet.
It was great to see Sally Wright in action. Every CMA should be trying to poach her.
Posted by Michael Kiely at 9:13 PM No comments: