How much closer to soil carbon trading can CSIRO take us?

What do you do when you feed into a computer soil carbon data from more than 20,000 samples from more than 4,500 locations and a range of land uses and management regimes and what comes out is... gibberish? No meaningful pattern? This happened with SCaRP. It failed to detect statistical difference in soil carbon rates between land management practices. (See 'No difference was detected...' below)

What would you conclude? Taken literally - as some experts did - means you would be accepting the absurd proposition that farmers can treat soil anyway they want, it won't change soil carbon levels. If so, where did 70% of the nation's Soil Organic Matter go since 1770? Aboriginal Agriculture? Or over-grazing, over-ploughing by farmers who learned to farm in Europe?

This is now our focus.


‘No difference was detected …’

Analysis of results of the $24m Soil Carbon Research Program has led some to the conclusion that management cannot affect carbon levels in soils.

The Case For Soil Carbon 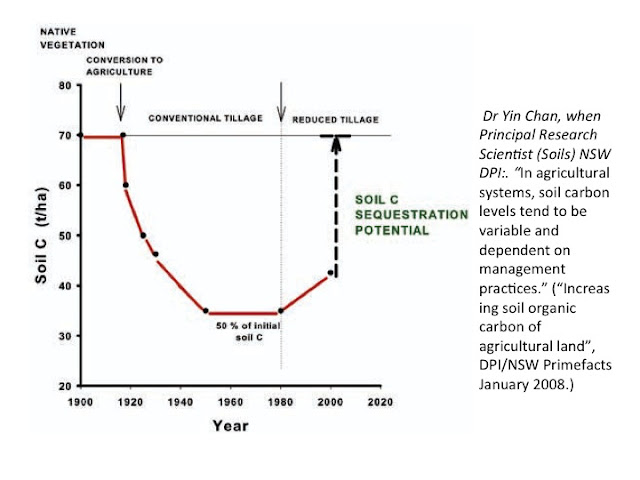 There is no rule book for different land management practices. What one farmer calls ‘rotational grazing’ another calls ‘cell grazing’ and another ‘time-controlled grazing’ or ‘grazing management’. Or ‘high intensity/short duration grazing’.  And every farmer adapts techniques according to their skills, knowledge, and experience. None of these variables were considered in the study. But  Dr Jeff Baldock, in his report on SCaRP, seems to conclude that the manager rather than the management system that makes the difference: “Consider the situation where the water use efficiency of continuous cropping systems ranges from 60% to 90% across a region due to landowner abilities and preferences. Under these conditions, differences in the input of carbon to a soil will result and soil carbon values will vary even under similar soil, climate and topographic conditions.”

It's the farmer, not the farm management system. It's the knowledge, expertise and experience of the manager. This is where the next wave of research should be focussed.

Finally, when a farmer practices Carbon Farming, they don’t do it one activity at a time. They might have six or more soil-carbon-boosting practices active on the same paddock over a reporting period of 5 years. Yet studies will single out one of them and try to measure the results. This problem arises because of the choice made between two approaches to measuring sequestration: Activity-based (isolating each practice for separate analysis) and Outcome-based (simply measuring the change in soil carbon levels for a defined piece of land). Insurmountable complexity and cost attend the one the IPCC chose where Common Sense would recommend the other.

Posted by Michael Kiely at 12:43 PM No comments:

They said it would never happen...

1. ...but it happened. The admission of soil carbon into the Kyoto compulsory compliance market.

2. ...but it happened. It is no longer necessary to understand spacial variability in soil to calculate  carbon accounts. CSIRO has developed a statistical method that enables the sample to 'embody' the variation.

3. ...but it happened. Research reveals that much higher soil carbon scores could be possible and we might have to redefine the “potential” of Australian soils. The shock finding of the $24m Soil Carbon Research Program was that the top performers – usually drafted out  as outliers because they skew results – reveal that it's the farmer, not the farming system that makes the soil carbon grow.

4. The CSIRO agreed to Partner with Carbon Farmers of Australia in a submission for funding in the Action On The Ground Round Two. Our Project  - titled "CSIRO and Carbon Farmers on Soil Carbon: Removing the Blinkers and Learning Together". Major-General The Hon. Michael Jeffrey's Soils For Life are also partners. We will study the 'outliers' - a total of 45 soil carbon's 'top performers' - and we will study the implementation of major innovations such as exhaust carbon burial, inoculation with native soil microbial communities, and biochar/compost/nutrients pelletised.

5. The Department has finally put the foot to the floor. The Soil Carbon Reference Group had a day’s briefing with the Department on 17 May 2013 and have another day scheduled next month to debrief the Department. They are listening. It's happening.
Posted by Michael Kiely at 2:52 AM No comments: