I want the icing and the cake

When you hear soil carbon offsets called 'icing on the cake'.  This saying says there ain't much cake to be had anyway and it could all disappear tomorrow... In other words, don't take the money unless you don't need it. The new Guidelines for Submitting Methodologies reveals that the architects of the CFI regulations believe they have made the sequestration in soil and vegetation so unattractive that few will get involved. It says that landholders should only consider environmental plantings or soil carbon projects that improve productivity or have NRM benefits. This is because the Permanence Principle (or 100 Year Rule) is not likely to be attractive unless it is 100 Years of benefits for the farmer.  Trees should not be planted for offsets, in the first place. Landholders could consider trees for unproductive or eroded areas, or those that provide shelter for stock, create corridors for wildlife or improve water quality. They don’t want forests planted on land that has more profitable agricultural uses. We agree, but who is to say what is degraded and what is profitable? A good carbon farmer can turn degraded land around.

•  “10 WAYS TO STAY SANE AND SUCCESSFUL ON THE WAY TO A METH” by Carbon Farmers of Australia.  Only $15.00. (Satisfaction guaranteed.)

Posted by Michael Kiely at 5:39 PM No comments:

A word to the wise for those clinging to their  IP, there is provision to keep some information confidential. “However, if the DOIC decides that the protection of confidential information would prevent the public from making a proper assessment of the methodology proposal, the DOIC may choose not to progress the application.” In fact the Government is insisting that a Creative Commons Licence be signed as part of the application process: “The Government is supporting the development of methodologies that have broad application by facilitating collaboration between scientific organisations, industry associations and private companies and individuals. This is to minimise scheme complexity and maximise opportunities for landholders under the CFI. It will also reduce the cost of administering the scheme. The methodology template contains a creative commons ‘BY’ licence for applicants to sign.


• ARE YOU IN A METH?   No matter, you will thank your lucky stars when you get your hands on a copy of  “10 WAYS TO STAY SANE AND SUCCESSFUL ON THE WAY TO A METH” by Carbon Farmers of Australia.  Only $15.00. (Satisfaction guaranteed.)

Posted by Michael Kiely at 4:51 PM No comments:

BOTTOMLINE is the baseline

Setting a baseline for a project has changed dramatically in the new Methodology regime. Instead of one baseline approach there are now 5 or 6, based on the principle that the more accurate the baseline is as a reflection of the likely trajectory of the volumes moving through sources and sinks within the boundaries of the project before the project starts, the more accurate the accounting of the change in land management will be. This will need more than one type of baseline to cover the variety of situations. For instance, in some circumstances, it could be assumed that, the trend in emissions and sequestration will be the same in the future as it has been in the past in the absence of a project. In these cases it would be reasonable to derive baselines from historical emissions data or carbon stocks. This is called a Historic Baseline, looking backwards. Looking forwards, Baselines can be set using projected or modelled estimates of future carbon stocks or emissions under various scenarios. A baseline scenario for a projected baseline must describe the activities driving the future trend in carbon stocks or emissions, and provide evidence to justify why it is reasonable to assume this trend would indeed occur. But wait… there’s more! Baselines may be constant, ratcheted or indexed, it depends on what the trend in emissions would have been in absence of the CFI project. Constant baselines are set at a fixed level. Ratcheted baselines change over time, reflecting a pre-existing trend in emissions…  declining or increasing. Indexed baselines are based on a particular variable which directly affects the project emissions and sequestration, for example, rainfall or herd size. 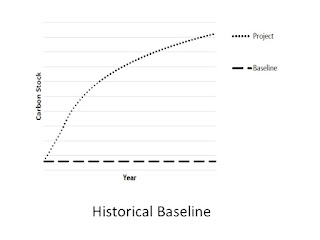 Reforestation project with constant baseline. In this example, the baseline assumes a continuation of the past land use (e.g. pasture that was clear of trees) in which the carbon stock was low and unchanging. In the project scenario the carbon stock increases over time due to sequestration in the growing trees, and is levelling out as the forest matures. 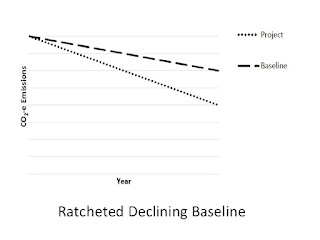 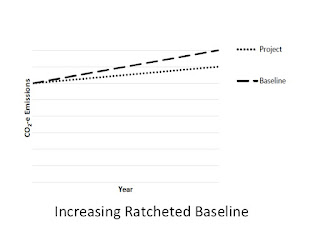 In this example, the increasing baseline indicates that emissions are expected to rise in absence of the project. Emissions also rise under the project scenario, but at a lower rate than the baseline (for example, through improved pasture management practices that reduce the rate of carbon loss from soil). Thus, the project provides emissions reductions from the ‘business-as-usual’ baseline; these reductions are additional and can be credited under the CFI. 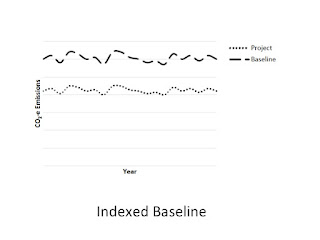 In this agricultural example, the baseline and the project emissions are indexed against a variable, in this case the number of animals within the greenhouse gas assessment boundary. The project activity reduces emissions by a fixed 30% on the baseline, while the indexed baseline is used to account for fluctuations in herd size included in the project over time.

•  DO YOU NEED HELP? With getting a project up on your property? With a Methodology? With preparing a submission for a Methodology Determination? With the Purchase of Offsets? With measuring your Carbon Footprint? Carbon Farmers of Australia is Licensed to give advice on the CFI. Call 612+6374 0329

Posted by Michael Kiely at 4:41 PM No comments:

A landholder seeking to increase soil carbon levels or reduce emissions from from fertiliser to earn offset credits now has a new layer of complexity: you have to calculate the effects of background variability such as climate or rainfall. So says the  new Guidelines for Submitting Methodologies. A dry spell could inflate the impact of an N2O suppression project. The reverse – extra rainfall – could boost soil carbon stocks. The trouble is that the farmer would be getting more than they should if rainfall was normal. (What’s normal?) “The purpose of such adjustments is to ensure that reported abatement (and hence crediting) provides an accurate reflection of the impact of changes in management practices on carbon stocks over time. Unless such adjustments are made, credits could be issued for temporary abatement.” The Department does not dictate how to measure variability. That’s up to the to the meth applicant to suggest.

•  DO YOU NEED HELP? With getting a project up on your property? With a Methodology? With preparing a submission for a Methodology Determination? With the Purchase of Offsets? With measuring your Carbon Footprint? Carbon Farmers of  Australia is Licensed to give advice. Call 612+6374 0329

Posted by Michael Kiely at 2:51 PM No comments:

A license to print money

(For the uninitiated, a "Methodology" is a license to print money. A "meth" as we call them is a set of rules that, if you follow them, can lead to riches. (The piggery near Young generating power to heat the stalls using methane from manure is looking at $90,000/year in offset credits.) But the road is long and winding... The new version of Guidelines for Submitting Methodologies  is handy for those on the road.

• CHARTING a course: Where possible a proposal for a methodology should use charts, diagrams, graphics and process flow charts to assist understanding of the activity description.

• NO SALE: The owners of trademarked or proprietary products can’t write a starring role for them in their meth by making their product a compulsory ingredient. The Methodology “will instead provide general descriptions of any technologies, equipment or products needed to undertake abatement projects.” The DCCEE says this allows methodologies to have broader applicability and remain current as new and improved technologies or products come onto the market.  The ingredient owner can enjoy first mover advantage. The DOIC is likely to move on a meth “with broad coverage or those that are very straightforward … ahead of proposals that are tailored towards individual projects or those which are very complicated.”

Posted by Michael Kiely at 2:33 PM No comments: