Hooray for the NSW Farmers' Association 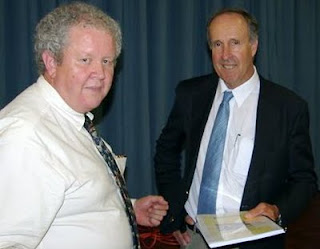 Hooray for the NSW Farmers' Association. It has a soil carbon policy:

"NSW Farmers’ Association is calling on the Government to exclude Agriculture from emissions liability under the CPRS and to investigate policy that would enable farmers to sell carbon credits created in soil, crops and pasture." (The NFF is not so definitive in its support.)

The NSW Farmers' Association's former president Jock Laurie was the first industry figure to endorse the Carbon Coalition's stand on soil carbon credits. Despite this, the Association was unable to get a motion up at Conference, due to the grumpy old denialists clogging the Association's debates. We presented new President Charles Armstrong with a copy of the Carbon Farming Handbook at Gulgong during his recent western whistle-stop tour.

The Association has a membership drive on - as sign of the times. Support the Association that supports soil carbon credits.
Posted by Michael Kiely at 11:38 AM No comments:

Major General Michael Jeffrey, the former Governor General who has made it a personal mission to address what he calls a "national emergency" over Australia's natural water supplies, has soil carbon sequestration and trading in offsets as a key part of his strategy.

The NSF Task Force is not unlike the Carbon Coalition, with one difference: in our movement no one solution predominates. In the world of NSF, one solution has precedence. The "Dialogue at Kioloa" near Bateman's Bay last weekend, which resulted in the article you circulated to your members, was attended by around 100 people of diverse backgrounds and interests. They were united by one thing: an invitation from Major General Michael Jeffrey, the former Governor General, who has a personal mission of seeing Peter Andrews principles put into practice because he believes the nation is facing a water crisis. A presentation to senior federal pubic servants at Peter's former home Tarwyn Park in the Hunter Valley was made by rangelands soils specialists, biofertiliser experts, and soil ameliorant producers. These were presented as part of an holistic solution to water issues, with Peter's techniques the centrepiece of the portfolio. It was agreed that water is the gatekeeper for everything else, but that it is not a solution on its own. The outcome of the day was a decision to assemble a Task Force to implement this vision. The Major General declared that the secret to success was in understanding how all the parts fitted together and the Carbon Coalition provided a solution in the form of the attached. (Farmland Ecosystem Restoration Planner, aka SCOT: The Soil Carbon Optimisation Tool.) Another issue the Coalition sees arising from the weekend, is 'adoption' of the practices by farmers. Here soil carbon credits are seen by the Task Force as the catalyst. The Carbon Coalition - which has always been a supporter of Peter Andrews and Natural Sequence Farming as a carbon-stimulating technique - is behind the Task Force 100%. To further complicate the matter, a new association has been formed in this space - Ecological Agriculture Australia - which acts as a resource for those interested one, any or all of the 5 Pillars of the Association: Food, Farming, Ecology, Ethics, and Education. The contact there is Kerry Cockrane at CSU Orange. The Carbon Coalition is active in the working party establishing this organisation. This is because the Coalition's laser-like focus on soil carbon credits is a narrow field of endeavour which aims to have a universal impact across the broad area of focus of the Task Force (Restoring Farm Landscapes) and the multi-faceted ambitions of EcoAg Australia (bringing farmers into closer relationships with environment and community). The Carbon Coalition is integral to both of the organisations because we are symbiotic.


Scenes from the Dialogue at Kioloa 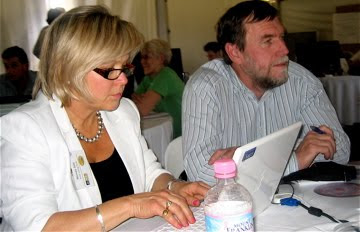 Where two worlds meet: Rhonda Daly from YLAD Living Soils - a major sponsor and promoter of thought leaders and progressive ideas in Natural Farming - worked alongside the CSIRO's Dr Brian Keating, Chief of Sustainable Ecosystems. Brian's organisation was a major sponsor of the Dialogue. 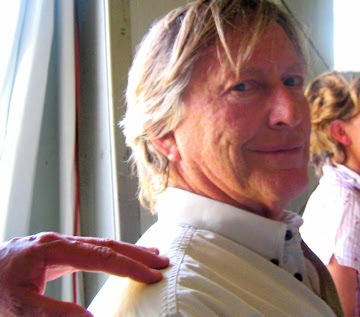 Tony Coote is an accomplished carbon farmer who would be a black belt 5th Dan were it Karate. He has established an Institute to foster the next generation of "Regenerative Farming Advocates" (my words, not his). He has a prodigious command of the written word. 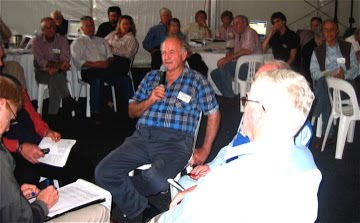 Peter Andrews must have felt like a boy on his birthday - everyone was there for him. Peter is very aware of the delicate balance the Task Force is trying to achieve. He keeps repeating, like a Mantra, that the challenge is for all to work together with 'integrity and cooperation'. 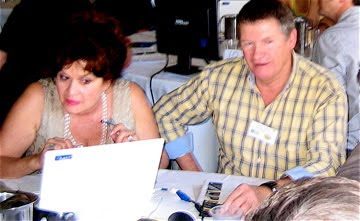 Adrian Laurie of LaurieCo worked in a discussion group with Caroline Curry of Public Private Sector Partnerships... Adrian is contributing his knowledge of biological farming and Caroline her abilities as a corporate lawyer. 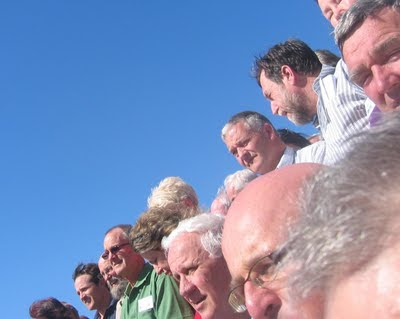 GOOD NEWS - SOIL CARBON IS "GO!": A new tradable product called
an "Australian Removal Unit" is being offered through the Prime
Carbon "Soil Enhancement and Carbon Sequestration (SECS)
Program. SECS is a process of supported land management change
resulting in carbon storage in soil." The Carbon Coalition is
helping with this pioneering opportunity because its success
will achieve the Coalition's Goals: "To see soil carbon traded
as a legitimate offset and farmers paid fairly for what they
grow." Louisa Kiely will explain at the Carbon Farming
Conference at the National Field Day Site, Orange NSW, 4th-5th
November, 2009

FARMERS: START BANKING YOUR SOIL CARBON TONNES NOW!
Whether you want to trade asap or sit on the fence and watch,
don't let valuable soil carbon become untradable because it
isn't registered. You can apply for a Soil Carbon Sequestration
Baseline Survey now. Call 02 6374 0329.
Or mail louisa@carboncoalition.com.au.
Posted by Michael Kiely at 11:35 AM 2 comments:

RALLY TO THE CAUSE - IT'S CRUNCH TIME!

RALLY TO THE CAUSE - IT'S CRUNCH TIME: The only governments contemplating forcing Agriculture into a punitive cap & trade system to reduce methane and N2O are Australia and NZ. Meanwhile the December Copenhagen Round of Talks could change the game. The USA has negotiated with the UN FAO, the World Bank, the EU, etc. to have Agriculture removed from the Kyoto Protocols and treated separately. The reason: Food Security. These world powers fear major wars will break out over access to land and water within 50 years... We must buy some time... Professor Rattan Lal says we can remove the equivalent of 50 parts per million CO2. WE MUST PUT MAXIMUM PRESSURE ON OUR GOVERNMENT TO JOIN OBAMA'S PUSH TO PRESS THE BUTTON ON SOIL CARBON CREDITS.

YOU CAN DO THAT BY SUPPORTING THE CARBON FARMING CONFERENCE: The 2009 Carbon Farming Conference & Expo is on at the National Field Day Site at Borenore near Orange on the 4th-5th November, 2009. Highlights will be *Peter Andrews*
(Natural Sequence Farming) and *Maarten Stapper* (ex-CSIRO) - both seen on AUSTRALIAN STORY on ABTV - both heretics of
conventional agricultural science. Peter talks about how water can be managed in the landscape to grow soil carbon and Maarten will describe how soil biology is the primary source of carbon in soils. Also inventor *Gary Lewis* from Canada is bringing his "BioAgtive" device which converts tractor exhaust to a carbon-rich fertiliser and buries it with the seed as it is sown. There will also be the launch of an association called *Ecological Agriculture Australia* and the "Soil-Food-Human
Health" link will be exposed by author *Dr Carole Hungerford*. The gap between city and country is closing via the "Farmer-To-City-Cousins" fresh food program called FoodConnect, brainchild of *Robert Pekin*. With our success in getting $26m in research funds for soil carbon, the CSIRO's *Dr Jeff Baldock* will explain how research will make trading in soil carbon offsets more likely. *Dr Brian Murphy* will reveal his "Matrix" measurement solution and Professor *Alex McBratney's* "on-the-fly" Near-Infrared Spectroscopy will be demonstrated. Newly-appointed Sydney U.*Professor John Crawford* reveals his theory that soil is 'sentient' and acts somewhat like an organism.
(And the Carbon Cocky Competition needs entrants.)
FOR A BROCHURE CALL 02 6374 0329 (www.carbonfarming.net.au)

EXPO: There is lots of exhibition space. We chose the site for that reason. Now we need exhibitors.
FOR A BROCHURE CALL 02 6374 0329 (www.carbonfarming.net.au)

SPONSORSHIP: There are special sponsorship opportunities...
FOR A BROCHURE CALL02 6374 0329 (www.carbonfarming.net.au)

ANDREWS WITHOUT A BULLDOZER: IT'S CALLED "LANDSMANSHIP": a new term to describe an almost 'hands off'
approach to farm landscape and soil health. Paul Newell, a long-time colleague of Peter Andrews, has developed his ideas over
40 years. They are outrageous, but they work. He breaks down and destroys ecological units in order to see what will remedy the situation. Paul Newell will speak at the Soil Carbon Farming Conference.

CAN YOU MAKE WATER FROM AIR? Just tooling about with the formulae for the process of photosynthesis, as you do, Ken Bellamy noticed that there was a Hydrogen atom left over after the two distinct stages of capturing the CO2 and converting it. This led to a curious discovery which has the scientists racing to confirm it scientifically.. Ken Bellamy will speak at this year's Soil Carbon Farming Conference.

THANK YOU for your support - it has been inspirational. Rural Press's Science & Environment Editor Matt Cawood said he believes it is now inevitable that we will win. We wish we felt so confident. The closer we get to the line the more desperate the attempts to derail the solution have become.

WE NEED YOUR HELP - we're not asking for charity. You can show your support by coming to the Conference ($225 for 2 days),
enrol in the half day seminar ($145), become a sponsor (which starts at $1000), take an exhibition stand (start at $550), advertise in the Carbon Farming Handbook (starts at $650) or purchase of the Conference Edition of the Handbook ($55).

You'll get an unforgettable experience. You can get out of bed each morning knowing you are saving the planet - what an awesome feeling. Call us on 02 6374 0329 or email louisa@carboncoalition.com.au

PS. Please pass this on. NOVEMBER IS CRUNCH TIME - we must send our Government to Copenhagen
willing to join the rest of the world in a soil carbon solution.

PPS.Do you know a company, wealthy individual or philanthropic trust that would value the work that we do and entertain an
approach for support? Please let us know.

PPS. To you, for your help, you are the apple of God's/Gaia's eye.
Posted by Michael Kiely at 7:21 AM No comments: