Don't panic! DON'T PANICKKKKKK! The collapse of the price for some units on the European Carbon Exchange is GOOD NEWS FOR COMPANIES PAYING A CARBON TAX! It is GOOD NEWS FOR BUYERS OF OFFSETS... Now is the time to BUY BUY BUY!!!!

The Carbon Market is a real market. Prices go up and down as a result of Supply and Demand. Right now there is OVER-SUPPLY - There are too many sellers chasing too few buyers in Europe.

The price is right for buyers who want to bank their cheaply-procured units until they are needed.

The low price makes it easy for landholders to sign up for 100 years because you can buy enough to cover your entire liability.

Why Over-Supply? Two reasons: 1. European governments grossly over-allocated units to the extent that there are a billion and a half units excess to requirements choking the market. 2. These same governments gave the world the European Financial Crisis. The European Financial Crisis is the villain; price for Certified Reductions Units reached US$24 before the Crisis and 40¢ after it.

The EU came up with a plan to support the price: it wants to put a billion units on ice until 2015. On Tuesday it was rejected, 334 votes to 315. Confidence in the EU's capacity to manage the problem collapsed and with it the price.

Three things happen in 2015 which will have a big impact on this situation: 1. China - the biggest holder of units - enters the market as a seller, bringing demand on a scale never seen before. 2. The year 2015 is a full two years from now. They say a week is a long time in politics. It is even longer in carbon markets. 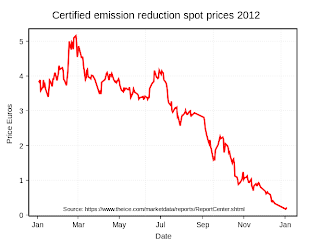 This "crash" started back in 2008 and continued on to this latest event. The spot price for Certified Emissions Reduction units has been a slow-motion train wreck for months and years.

The role of governments in these markets is a debate worth having.

Posted by Michael Kiely at 10:39 AM No comments: