Don't stand on the sidelines yelling "The price is too low! It'll never work." Excess supply of Certified Emissions Reduction (CER) units is the major reason for the low carbon price today, says the Worldwatch Institute. China is especially hard hit as it dominates the Clean Development Mechanism (CDM) market with the largest investment of CDM projects in the world (US$220 billion, or 62% of total registered CDM projects globally. Under the current low CER price, CER credit buyers are demanding price renegotiation or even terminating their contracts with Chinese CDM projects because the agreed upon price was much higher when they enrolled. More than US$6.44 billion worth of CDM projects in China face default and carbon assets deflation.  But China is also an emerging carbon market. It will issue Chinese Certified Emission Reduction (CCER). Projects in China scheduled for CER could be transferred into CCER, thus reducing supply of CERs and helping to boost CER prices in the world market. China’s domestic carbon markets has the potential to absorb 600 million CER credits annually in the future, which should be enough to help initiate domestic emission trading.The EU Commission plans to increase its greenhouse gas emissions reduction target and retire some allowances permanently.  CERs are also expected to be accepted in more carbon markets in the future.

Posted by Michael Kiely at 5:29 AM No comments:

The facts behind the headline - The Government’s announcement of cuts to the Carbon Farming Initiative sound severe, but appear to spare the funds we worked so hard to make applications for in recent months. The word “unallocated”  in the following sentence refers to rounds of funding that have yet to be announced, not those that are yet to be decided: “Return of $143 million of unallocated funding from the Carbon Farming Futures program to the budget”

Here are the figures: The Carbon Farming Futures program was launched as a $429m budget item.

THESE FIGURES ARE NOT OFFICIAL YET.

Posted by Michael Kiely at 5:57 PM No comments:

Removing the pain of Permanence

The Permanence Integrity Standard – known as the 100 Years Rule – is not understood by most people, including many experts. It requires that soil carbon levels be maintained for 100 years. Failure to do so, it is said, would see the farmer (or his descendents)  be required to repay the money. Many believe the farmer’s family (and the farmer’s banker) would not feel comfortable with such an exposure.  But the 100 Years Rule is not The First Commandment. It only appears to be major blockage to trade in soil carbon offsets. Markets have ways of innovating around blockages, and the IPCC itself has suggested several pathways, including self-insurance, standard crop insurance schemes, regional, national and industry-wide buffer reserves, cross project reserves, etc... The problem is not the period of time involved, but the size of the risk when introducing the new and the unfamiliar. 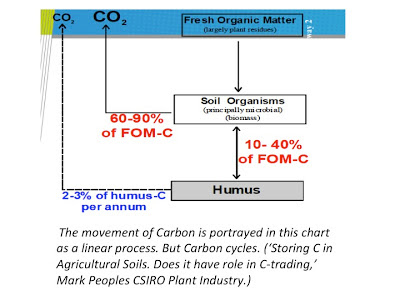 The size of the Permanence Problem is also misunderstood. There is a widespread belief that soil carbon is unstable and always leaks back into the atmosphere. However the CSIRO reports that the largest ‘fraction’ or form of soil carbon – humus – is stable for up to 1000 years. The unstable (or the “labile” pool) represents less than 10% of total soil carbon.


Even this more mobile, unstable pool can be managed and maintained by observing the carbon farmer’s objective of 100% groundcover 100% of the time. By maximising the input from plant photosynthesis, the farmer can maintain the carbon cycle at a healthy rate, replacing the mobile molecules.
Another theory creates a fiction of the fact that humus contains large amounts of essential soil nutrients by claiming that the farmer would have to buy fertiliser to replace them. This would make carbon trading uneconomic if it was the case.  But the CSIRO reports that virgin soils also tie up similar amounts of nutrients in humus – and Mother Nature doesn’t need to buy fertiliser to replace them. The thought that humus can be a negative influence in the soil is curious when you consider the many good things it does:  It is a source of Nitrogen and Phosphorus for plant growth; it profoundly affects the activities of micro-organisms; and it promotes good soil structure, thereby improving aeration and retention of moisture and increasing buffering and exchange capacity of soils.

Posted by Michael Kiely at 4:16 PM No comments:

Deep soil carbon doesn't just add wads to what farmers could be paid. It could add precious gigatonnes to the global inventory and could explain the missing gigatonnes (i.e.. the hidden sink soaking up CO2 - scientists have proven it exists by maths, but no one has found it yet.)

Some scientists have argued that the mystery sink was peat bogs in Northern Europe. Others believe it to be Tropical Forests.  No one thought to look at soils: after all, science told us soils don’t have the capacity: “According to a recent global analysis based on changes in the concentrations of carbon dioxide and oxygen (Plattner et al., in review), the world’s terrestrial ecosystems (vegetation and soils) were a small net sink during the 1980s and 1990,” said Woods Hole. But here we have Harper and Tibbett recording carbon levels two to five times greater than would be reported with sampling to a depth of 0.5 m.(2)
One bright spark in CSIRO was saying as much 20 years ago: “Atmospheric carbon budgets that ignore the possibility of terrestrial ecosystem responses to global atmospheric change do not balance; there is a 'missing sink' of about 0.4 - 4 Gt C yr-1. … It is well within the bounds of possibility that increasing carbon storage in vegetation and soils in response to the globally increasing CO2 concentration, temperature and nitrogen deposition can account for the missing C sink… Models of the global terrestrial C cycle indicate that an extra 0.5 - 4 Gt C yr-1 could well be being stored in soils and vegetation today in response to the CO2 fertilising effect... To obtain direct proof as to whether that this is happening or not is a major challenge.” (3)

Harper and Tibbett’s findings could just be the proof we need.

Posted by Michael Kiely at 9:34 AM No comments:

Roots are more important than surface biota in creating soil carbon, according to Schmidt et. al's peer-reviewed paper  Persistence of soil organic matter as an ecosystem property (eScholarship, 26-9-2012). "Root-derived carbon is retained in soils much more efficiently than are

above-ground inputs of leaves and needles40–42." Isotopic analyses and
comparisons of root and shoot biomarkers confirm the dominance of
root-derived molecular structures in soil43 and of root-derived carbon
in soil microorganisms44. Preferential retention of root-derived carbon
has been observed in temperate forests45,46, for example, where belowground
inputs, including fungal mycelia, make up a bigger fraction of
new carbon in SOM than do leaf litter inputs44,47. In addition to many
above-ground inputs being mineralized in the litter layer, root and
mycorrhizal inputs have more opportunity for physico-chemical interactions
with soil particles40. At the same time, fresh root inputs may
‘prime’ microbial activity, leading to faster decomposition of older
organic matter48,49 as well as changing community composition50.
Carbon allocation by plants thus plays an important part in soil carbon
dynamics, but it is not known how future changes in plant allocation
will affect soil carbon stocks51."