"It is important to resolve outstanding research questions as a matter of urgency, to remove this barrier to inclusion of soil carbon in emissions trading." So says five leading soil scientists from the NSW DPI. "In order to support a role for soil organic carbon in emissions trading, there is an urgent need to resolve several key research issues, namely developing low cost
methods of accounting for soil carbon; quantifying net carbon sequestration under different management practices for different soil types, climates and agricultural systems by supporting existing long term cropping rotation trial sites and the
establishment of new ones where appropriate; quantifying interactions of SOC sequestration with soil emissions of other GHG, namely N2O and CH4 and developing soil carbon models that can account for locally relevant agricultural management
practices." Dr Yin Chan and Dr Annette Cowie are co-authors of a paper* which declares "considerable SOC sequestration
potential exists in NSW agricultural land." 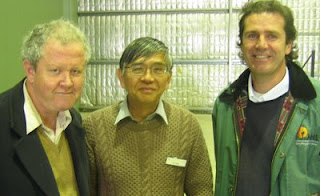 [PICTURED: DR YIN CHAN WITH ANL'S ROB NICCOL (R) AND MICHAEL KIELY AT A RECENT MULCHING SEMINAR AT MUDGEE NSW. DR CHAN IS IN THE TOP 10 SOIL SCIENTISTS FOR CITATIONS OF HIS WORK.]
They say the highest potential exists in pasture land in the higher rainfall regions (>450 mm), both as permanent pastures or as ley pasture in the cropping zone. "Considerable increases can be achieved by pasture improvement and improved management practices. Significant SOC potential also exists in the low rainfall rangelands which comprises nearly 50% of NSW. Much of the rangelands are in degraded state and considerable total SOC sequestration can be achieved for a small rate of sequestration per hectare. Promotion of conservation tillage practices (particularly no-tillage) is important to halt further carbon losses from cropping soils (emission avoidance). Currently, there is only a 35% adoption rate of conservation tillage techniques in NSW." 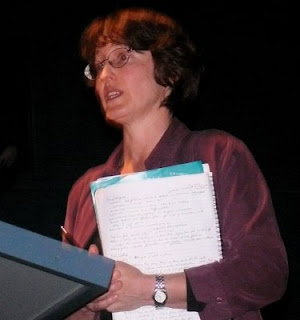 [PICTURED: DR ANNETTE COWIE SPEAKING AT THE LATEST CARBON FARMING EXPO & CONFERENCE.]
In addition, SOC can also be sequestered by adopting new land conversion and soil amelioration options such as bioenergy crops from perennial vegetation, recycling organics including biochars, and by ameliorating sodic and acid soils.
"Many of the management practices that are effective in increasing SOC in agricultural
soils also improve productivity and profitability, conserve the resource base and
protect the environment," say Chan et al.
We can expect that they will lift their current estimation a gross sequestration potential of 18 Mt CO2e/yr (equivalent to 11% of the total GHG emission) once they start testing Carbon Farming.