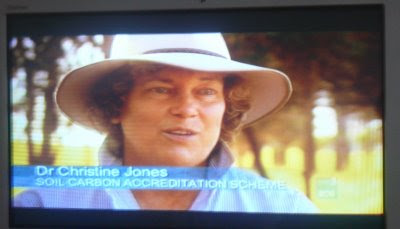 ABC TV's Landline program featuring Christine Jones can be found here. The program gave Christine the platform to explain her theories and also to reveal the 'conspiracy' of inaction among research funding bodies who refused to support research trials to put her theories to the test. The Carbon Farming movement is under an unofficial ban, pushing it into a Catch 22 situation: The scientific establishment criticizes us for having no data. The scientific funding establishment reject every attempt to provide the data. This is why Christine has had to take the unprecedented step of seeking private funds.

Both Minister Burke and Prime Minister Rudd have said recently '"we need more research into soil carbon". WeI don't think they know what "more research" means. It has become clear to those of us working daily in the field that science is not going to provide the answer to the question of measurement for trading because it can't. At least, not by finding finer and finer degrees of accuracy in measuring fractions of carbon. The more accurate the individual reading, the more the issue of flux becomes more problematic. We don't need any more research that reveals hard it is to measure soil carbon, or research that focusses on the fractions of carbon in soil. They are irrelevant in a trading context. Total carbon is all that is required. Flux is irrelevant. What the market needs to know is the delta in total C between two points in time. They are purchasing the delta. Dr Brian Murphy made this statement at our last meeting and is preparing a paper on the subject.

Minister Burke and PM Rudd both believe that the research being done is the type that will make trade possible. (The farming community is also under this impression.) I believe they are all wrong. But I would love to be proved wrong.

The type of research we do need is that which measures the performance of real world "Carbon Farming" techniques in different climate zones so we can populate a suitable model with data. The current models are sadly out of date, a point Peter Fisher made recently. The reality of carbon sequestration remains invisible to science. At our Carbon Farming Conference in Orange last year Coonamble cropper Anne Williams reported a 1% difference in Carbon between land cropped with compost tea and land left uncropped. That’s 1% increase in a year. Spring Ridge cropper Cam McKellar reported a 0.5% lift in 9 months. And Gulgong cropper Col Seis reported a rise in soil C 1.8 – 4% in 10 years. (Col's case in being evaluated by Dr YN Chan.) We have Carbon Farmers with better results than these. But who is studying combinations of advanced grazing management and pasture cropping and compost teas or probiotic inoculants? Who is aware of them?

We also need innovation in the processes that make trade possible. The Measurement Issue is not something science can resolve. Tony Lovell has clearly demonstrated that we should be guided by the answer to the question "For what purpose?" when asking how accurate our measurement need to be. When the answer is "to give a buyer confidence", the degree of exactitude needed is different to that which is required for the purpose of scientific enquiry. Degrees of uncertainty are necessary for the 'risk/reward' device to operate as an essential mechanism forming a market. (We have a DVD of the presentations available.)

I remember Michael Robinson from Land & Water saying at Mick Keogh's event last March: "The Science is lagging the politics." Twelve months later is it still lagging? By how much?

Q.1. How many research projects currently being pursued address the practical issues of carbon trading?

Q.2. How many projects focus on the rate of sequestration that can be achieved by land management techniques such as the following, as solus applications, and various combinations of these applications, across a range of climate zones? (Grazing Mnagement, Pasture Cropping, No-Kill Cropping, biological fFarming, Composting, compost teas,

Q.3. Have any proposals of the type mentioned have been submitted in the recent rounds which were rejected?

A MOMENTOUS OCCASION: Christine Jones at the meeting of the Carbon Coalition's Advisory Council on 5th May 2006, where Singapore-based businesswoman Rhonda Willson offered to fund her research - the beginning of the journey that will see the first cheques paid to farmers in the Australian Soil Carbon Accreditation Scheme exactly 3 years later, in May 2009. The Carbon Farming Movement owes both women a debt of gratitude.
Posted by Michael Kiely at 9:09 PM