DID YOU FEEL THE WIND SHIFT? (CONFERENCE DVD NOW AVAILABLE) 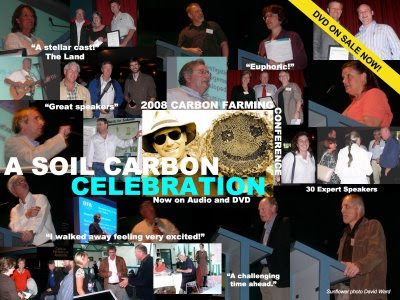 If you were at the 2008 Carbon Farming Conference in Orange (18-19 November, 2008) you may have felt it. A subtle shift in the wind. The year before, when we stood up before the scientists and carbon farmers from every State of Australia and NZ, we had only promises. Not much data. And we had no explanation for why the scientists could not report any significant carbon increases in Australian farm soil. There were even people in high places who preached that our soils couldn’t sequester much carbon. And many people believed them.
That was then. This is now. The wind has shifted. The Carbon Farmers have got data. And we have found a reason why science has not been able to detect the carbon increases that we knew all along were possible.
Even the writers of the Green Paper have to revisit their calculations. Because Farmer after Farmer got up and revealed results that defy logic and science. Last year’s Carbon Cocky of the Year Anne Williams reported a 1% difference in Carbon between land cropped with compost tea and land left uncropped. That’s 1% increase in a year. Cam McKellar reported a 0.5% lift in 9 months. Col Seis reported his 1.8 – 4% in 10 years.
He then recited a strange set of scores: his soil bacteria had increased 3.5 times, fungus was up by 9 times, protozoa up by 10 times, and nematodes increased 60 times. And insect life had increased 600%.
And there, for all to see, was the reason for the gap between soil carbon’s behaviour when scientists observe it and its behaviour when its microbial manufacturers of carbon are given their head. Unfortunately, there has been not much research done on soil biology. Most of the scientists of note are chemists or physicists. Hence the reason the CSIRO Plant people cold make those astounding claims about the cost of humus, as if there was only one source of nitrogen – a bag. 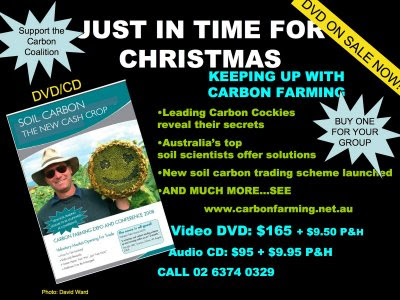 Biology is not fashionable in the science world. Many referred to it disparagingly as ‘witches brew’, probably in response to the eccentric Rudolf Steiner and his cows horns and the phases of the moon. Certainly Ken Bellamy from Townsville was in danger of being burned at the stake for the carbon scores he reported from the “Probiotic” treatments he has devised. The soil’s rapid response to the biological inoculants forms the basis for the carbon trading system Mr Bellamy has established in the region around Townsville.
His carbon scores ranged from the sober 1.5% over three years in a banana plantation to a scary 1.5% in only 7 months under sugar cane and to an outrageous 2% in just over 2 months under pasture. He was also able to report that Townsville Council has been able to halve the water it puts on its parklands after inoculating with probiotics.
It is a sign of the times that, rather than putting him to the sword, our seasoned senior soil scientists agreed to put Mr Bellamy’s claims to the test.
As a result of these two factors - data (yet to be verified by peer-reviewed process) and biology (bcoming more popular, with Sydney University advertising for a senior lecturer recently) – there was a different tone to the conference. An atmosphere of hope. How different the final session was, when the same old messages and predictions of minimal soil carbon emerged. (Annette Cowie’s presentation was brilliant.) One soil carbon minimalist was so brave as to predict the future – that no innovation would ever solve the problem of carbon in rangelands. 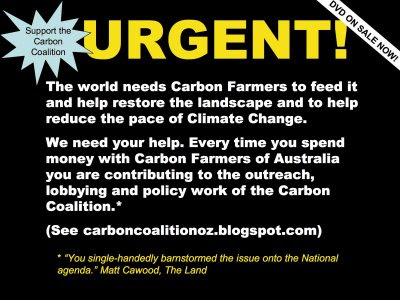 "The science is lagging the politics," said Head of Land & Water, Michael Robinson.

PS. The value of soil carbon is measured in many different ways. Dr Lal, in his speech at the Carbon Farming Conference, revealed that soil carbon could be worth US$250 a tonne in production and environmental and social value. But if soil carbon was worth $20/tonne (as proposed by the Australian Carbon Pollution Reduction Scheme), Anne Williams and Cam McKellar could have earned an extra $500/ha for the carbon they ‘grew’, Col Seis could have earned an extra $200/ha/year for 10 years (or a total of $2,000/ha), and Ken Bellamy’s grazier in Canberra would be $2000/ha better off (after only 2 months). [NB. Calculations based on increase in top 10cm, Bulk Density 1.4.] 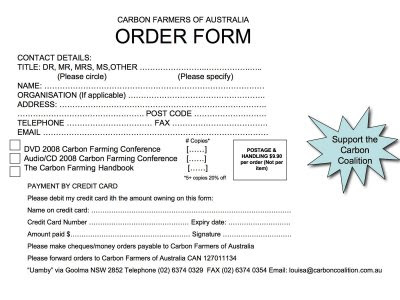 Posted by Michael Kiely at 2:38 PM

Greetings from Vermont!
Congratulations on the confererence!
The Australian Carbon Contingency -all of you - is a mighty force of nature.
You people are ballooning the intellectual, elemental, photosynthetic and microbial base that gives humanity it's food, water, air and happiness. No small thing, that. May it come to pass that we did the soilbuilding job broadly and quickly.
We carbon farmers here in the US, Mexico and Canada thank you for your contributions. We know it comes from the heart, as a core part of your lives with your families and communities, out in the fields and paddocks, in the meetings and all the rest that goes with building and monitoring soil life.
If soilbuilders are a new nation, linked by the land, water and air, now internet, with a mycorrhyzal internet to boot -then I'm proud to call you fellow countrymen and countrywomen.
I'm from the US, but my hat is off to the mighty soil carbon giants of Australia. Your history of soilbuilding includes many of the greatest minds of regnerative agriculture. I have a longstanding admiration of the great contribution of the late P.A. Yeomans, and the contemporary soilfolk of Australia are carrying his legacy of new topsoil with grace and force. I hope to get to know more of you personally in the future.
There is a vexing shortage of quality monitoring of passionate soilbuilding here in the US. If I could ask, please, please send data! Anything and everything that scientifically validates what we know with our hearts is greatly appreciated.
We are working on our own data generation, but you are ahead of us. Good on you! As ours comes available, we will shoot it over to you with priority, I promise.
With gratitude, from the frozen hills and fields of Vermont.
As always, Onward!
Abe Collins
abe@carbonfarmersofamerica.com