Escaping from the 100 Year Rule

Notice anything in the 3 charts below? The behaviour of carbon markets on three continents shows that if you wait long enough the market falls into your lap, offering a way to cash out of the 100 Year commitment that we know as the Permanence Problem. 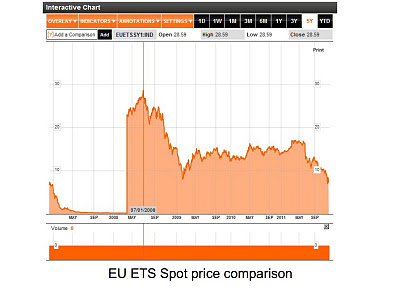 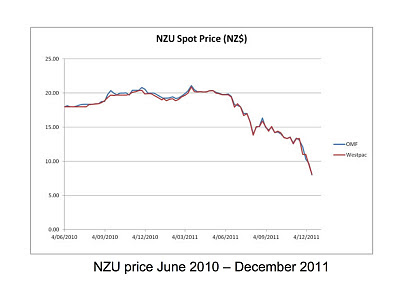 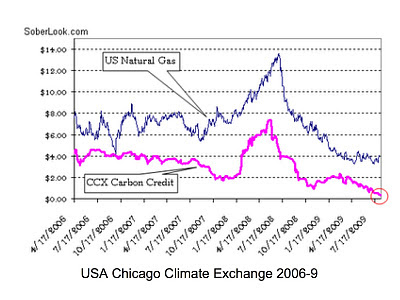 The Carbon Farming Group in New Zealand has been tracking the weekly spot price of carbon since June 2010, from both Westpac and OMF and have graphed them below. Recently the price was sitting around $8 per NZU.

“The price of spot NZUs remained reasonably steady at the $18 to $20 mark for around a year until June 2011, when it started dropping and hasn’t really stopped. There are several reasons why this is the case, but it mainly has to do with hot air units for sale offshore, and the dumping of carbon credit reserves by European industrial companies to boost cashflow,” reports Clayton Wallwork.

“It is useful to compare recent events in New Zealand with the experience in Europe. In 2008, when it first started trading the EU ETS followed a similar pattern as the NZETS, as can be seen in the graph below.”
The same pattern can be seen in the Chicago Climate Exchange. Sooner or later, new carbon markets collapse. And here is the opportunity for Australian farmers with the Carbon Farming Initiative. The Act allows a grower to withdraw from a contract by ‘relinquishing’ Australian Carbon Credit Units – which means handing back the same number of ACCUs they had been awarded for their measured offsetting.

One of the attendees at our one-day workshop “An Introduction to Carbon Farming and Trading” in Bungendore said he would relinquish his units when the market hit the floor – which all markets do at some time. The trick is to know when the ‘rule’ is not going to apply.

Posted by Michael Kiely at 1:46 PM