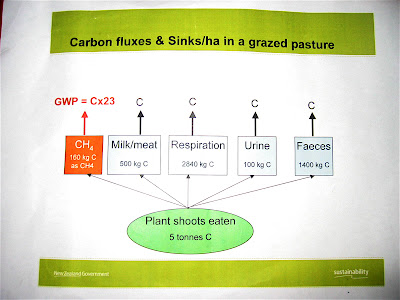 The NZ Government clearly does not understand the soil carbon issue at all levels and the gravity of its apparent decision on leaving soil carbon out of its ETS gives this ignorance the force of a national scandal.

First it dismisses soil carbon as having any potential to sequester carbon: In New Zealand, pasture is carbon neutral “and worse” says a memo from a senior departmental officer. A slide from a Government presentation has no sequestration in the plant photosynthetic process at all. The plant takes in 20 tonnes of Carbon per year and respires 10 tonnes to the atmosphere. The balance (10tC) is respired by plant roots (5tC) or turned into plant shoots where it neatly divides itself into the following emissions: faeces - 1400kgC, urine – 100kgC, respiration – 2840kgC, milk/meat 500kgC, and Methane 160kgC as CH4.

Having dismissed the possibility that grazed pasture can sequester any Carbon, the NZ Government points to the Voluntary Market as having “potential” for soil carbon credits. “This may be where the call for ‘offsets’ can be met,” says a senior official.

This wasn’t a slip of the tongue: the NZ Government called a tender for the development of a Voluntary Market mechanism for the country’s sequestered soil carbon to be traded. (MAF-POL/CP04 CARB-MARKETS-01 VOLUNTARY CARBON MARKET OPPORTUNITIES – SOIL CARBON MANAGEMENT IN NEW ZEALAND) One tenderer was the research company which proclaimed that New Zealand’s soils could not sequester carbon. It appears that it did not let its conviction that there would be no soil carbon sequestered that could be traded on this new Voluntary Carbon Market stop it from accepting a Government contract to provide these non-existent tonnes of soil carbon with a mechanism to be sold. 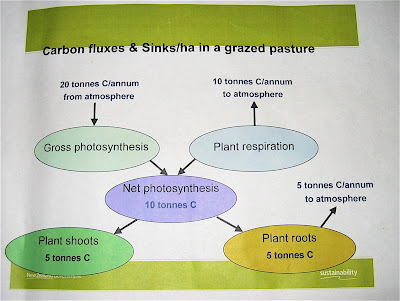 The levels of understanding within the Ministry and Cabinet, indicated by this single fact, are dangerously low given the disruption their decisions will make to the lives of NZ farmers.
Posted by Michael Kiely at 3:01 AM