Behind the scenes… Before the Goldrush

JOSTLING: A prominent big city climate change lawyer told me his firm was helping 2 or 3 different clients put together soil carbon operations. So we can be sure there are many more rushing to complete measurement systems and get them approved while sweating over clauses in contracts for farmers to sign. The most prominent of those jostling for position on the grid would be Terry McCosker's CarbonLink. When Terry predicted there would be ‘rivers of cash’ flowing from soil carbon he may have been anticipating the flow coming his way. We say this because the CarbonLink model requires the landholder be an RCS member who has been practicing “Grazing For Profit” techniques. Fenceline comparisions, the methodology RCS is using, works on the assumption that the next door neighbour won’t be an RCS member. This might not be the case for long as membership of RCS is the ticket to the dance for CarbonLink. In other words, Terry has engineered his soil carbon operation to act as a funnel for his RCS consultancy. Clever. [Correction: CarbonLink CEO Rod Rush denies the RCS precondition and says: "By the way, anyone can participate in the Carbon Link model including holistic management and carbon coalition devotees."]

CMA TAKES CREDITS: One CMA wants to cash in on carbon credits that is ‘clients’ might earn. The agreement landholders are signing has the following words: “any carbon credits generated through activities of this project / bid will become the property of the (name withheld) CMA, and net returns from their sale shared with the landholder.” Now there is a certain logic to this. If the CMA contributes 100% of the funds for the tree planting, for instance, you might say it is reasonable that they share in the spoils. But is it in a CMA’s brief to collect carbon credits earned on its clients’ properties? Is it time the role of the CMA was considered in light of the coming carbon market? Soil carbon trading would create a demand for CMA services and support for such things as wire and water. 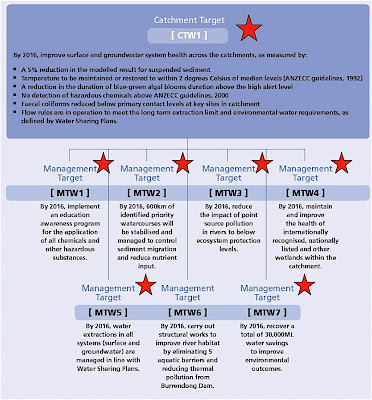 CMA SYNERGY WITH SOIL CARBON: . If the price of carbon goes high enough, landholders may not need the incentive of CMA funding to make the changes to land management sought by the Government. And if a steadily-rising soil carbon level in the landscape brings with it all the associated benefits: better soil structure, improved hydrology, reduced salination, increased biodiversity, etc. the CMAs should find their jobs getting easier and easier. Reading the Central West Catchment Management Authority’s Catchment Action Plan 2006-2016, we were struck by the number of Catchment and Management Targets across the basic themes of Salinity, Water, Vegetation, Biodiversity, and Soil that the widespread use of carbon farming techniques will address. The synergies are uncanny. For instance, assume a take-up rate of carbon farming of 85%. (This figure can be reached within the first 5 years over the next period of the Catchment Action Plan.) 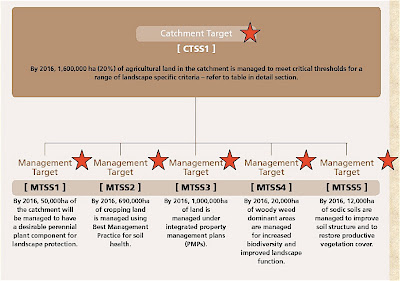 We were able to put a star – which means Carbon Farming can help by providing a polluter-funded, private enterprise solution for achieving CMA targets – on 5/5 Management Targets for Soils, 4/4 for Biodiversity, 9/9 for Salinity, 6/7 for water, and 6/9 for Vegetation. Even if you cut it in half, it is still a major contribution to the CMA’s efforts. The CMA concept always included the community and the farm sector. With the formal recognition of Carbon Farming and Soils recently, there will be a higher percentage of farmer input, which will please many in the CMA.
Posted by Michael Kiely at 9:35 PM