"The best conference I have ever been to."

"The best conference I have ever been to." This is the word from John Lawrie, soils expert and CWCMA stalwart, referring to the Carbon Farming Conference & Expo this week at Borenore, near Orange NSW. More than 400 attended the Coference or the half-day "Soil Carbon 101 Workshop" or the dinner or all three. Exhibitors numbers were up 100%. Attendance at the 101 workshop rose from 30 to 100 this year. We had more scientists than ever before. And this was the first of our conferences to attract a former Governor General (Major General Michael Jeffery).

The event had many emotional high-points (for me): the induction of Christine Jones and Peter Andrews into the Hall of Heroes of the New Agricultural Revolution; the emergence of Paul Newell with his gentle approach to healing the land that he calls "Landsmanship"; the decision by CSIRO's top soil carbon scientist Jeff Baldock to attend every session of the conference (unlike the 'seagull'* approach of some last year); the shockwave that went around the room when Ken Bellamy revealed his new interpretation of the chemistry of photosynthesis; the awe-inspiring and equally shocking implications of Prof. John Crawford's insights into the 'thinking soil'; the presence and the presentations delivered by the two men behind the "Soil Carbon Mythbusters" national tour David Waters and Clive Kirkby; the presentation of a dozen eggs - biodynamic, organic, free range - by farm innovator and visionary Tony Coote to the Carbon Coalition's Michael Kiely; the rain dance master-minded by Nick Ritar; the excitement in the voices of the Carbon Cocky winners when talking about how their attitude to farming has changed... The "hits" of the conference (based on the 'Rest Room Index of Speaker Mentions') were Gary Lewis, Paul Newell, Dr Carole Hungerford, Robert Pekin and Algae.... and 'all these young blokes, how can they know so much at their age?'

The gap between the past and the future is only a moment. But such a moment... 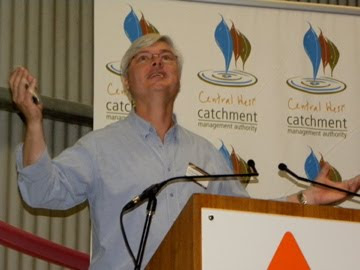 Dr Andrew Rawson seeks divine inspiration to give him an answer to the question we put to him at the end of his Chairman's introduction presentation. The title of his presentation was, 'Does Science feel the Urgency?' He started his address with a sense of urgency: saying we did not want to hear the same-old same-old about SOIL CARBON, such as soil health, water holding capacity, etc. No reciting of the old litany of soil carbon's benefits. Unfortunately broke his own rule when he recited the litany of 'difficulties' or blockages to soil carbon offsets trading - measurement, permanence, additionality, etc., which we thought we had left behind. How difficult it is to see in ourselves that which we can see so clearly in others. His response, when asked - how far have we moved in Soil Carbon Science in 12 months? - he said 'We are another year ahead.' We'll catch up with ourselves soon. There was a genuine clash of ideas between scientists and farmers this year, proof that the experiment in creating a safe debating environment based on respect, integrity and collaboration is working.

* (ie. fly in, mess all over everything and everyone then fly out)
Posted by Michael Kiely at 11:35 AM