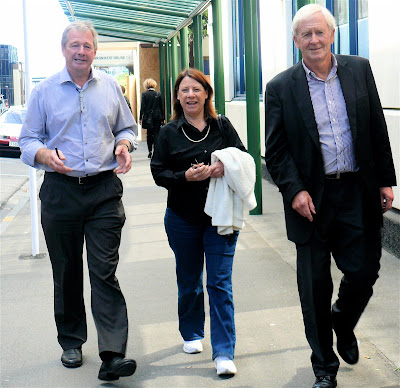 The Kiwi contingent to the Carbon Farmers Expo & Conference did far more than simply attend the event in Mudgee last November. They went back to NZ all fired up with how far ahead of the game Australia is compared to NZ and plotted to "let the genie out of the bottle" in that country. Alan Mayne (right) and Max Purnell (left) are agriculturalists, entrepreneurs, visionaries and philanthropists. Alan contributed his financial support and organisational skills, and Max his political connections to get the Carbon Coalition in to see many influential people in NZ. Max is a Trustee of Agmart, the NZ Government's funding body.

(1) We met Clive Howard-Williams from the National Institute of Water & Atmospheric Research who told us of the dramaitic danger faced by many of NZ's natural waterways due to runoff. The land needs increased soil carbon to filter the water as it leaves. 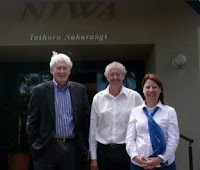 We also learned that there is a controversy over soil C in NZ soils. One group of scientists maintain carbon has reached "steady state" ie. can sequester no more. Another group report that carbon levels across the country have collapsed in the last 25 years.

(2) We spoke to an audience of 350 NZ farmers in Christchurch at the "Farming For Change" Conference, organised by Peter Floyd's consultancy eCOGENT.

The three day event featured Dr Arden Anderson (a medical doctor who has an interest in the link between soil health and food nutrition.) 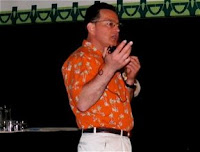 With him was Dr Paul Dettloff, a vet from the USA who discovered the secret to animal health lies in soil biology.

(3) President of the Federated Farmers, Charlie Pedersen, was very willing to discuss the NZ soil carbon situation and especially the methane situation.

Agriculture is the source of the highest proportion of NZ's GHG emissions, responsible for 49% because of the importance of the sector to the economy. (The world average is 12% of emissions from agriculture.) Methane is the main source.

The soil C solution was news to everyone we spoke to in NZ and especially the potential for it to meet the methane overhead. The official government position in NZ reflects the conventional scientific attitude towards soil carbon: The only sink that exists in NZ is forests. "Removals of greenhouse gases from other changes jn land use were not significant (in 2005)", reports the Department of the Environment. The level of understanding under the direcion of conventional science results in statements like these from the Department: ""The biological health of soil is determined by measuring the level of potentially mineralisable nitrogen in the soil."

(4) The current state of NZ's soils (over the last decade) is typified by increasing compaction, loss of organic matter and soil structure under cropping, and nitrogen build-up under dairy pastures.a onblur="try {parent.deselectBloggerImageGracefully();} catch(e) {}" href="http://2.bp.blogspot.com/_fTsAvkuJrEk/R9CfAqF5usI/AAAAAAAABpg/sfQH1EAKBa0/s1600-h/P1060352.jpg"> 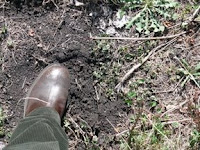 "Most declines in soil health are potentially reversible," says the Department of Environment. "But the shift to more intensive farming practices in many regions may make a reversal difficult to achieve in some soils." The 500 Soils Project found the following average total carbon scores for different land use changes: Native Forest 56.5tC/Ha, Dairy Pasture 66.9tC/Ha, Drystock Pasture 50.8tC/Ha, Arable Cropping 40.7tC/Ha.

Posted by Michael Kiely at 1:13 PM