To the True Believers and Hornblowers,

"Well they blew their horns.... and the walls came down." (The Walls Came Down, by The Call, is the theme song of the Carbon Coalition) 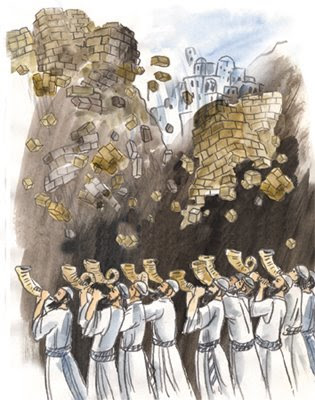 The Walls are made of old paradigms, misinterpretations, suspicions, vested interests, ignorance, and fear. Cracks are appearing in them and this week PM Rudd kicked a big chunk out.

Many people played played a major role in projecting the soil carbon issue onto the national agenda. In the wake of PM Kevin Rudd's announcement that soil carbon would be thoroughly investigated, the Carbon Coalition thanks a long list of people and bodies that "blew their horns" and assisted the soil carbon cause.

The Coalition also thanks the Hon. Tony Windsor, Member for New England, who asked a PM Howard a question he couldn't answer in Parliament for the Coalition after we gave him a briefing. Thanks also to the Hon. Peter Garrett who gave us a fair hearing and saw to it that our demands were included on the ALP Platform for the last Election. The NSW Nationals' Andrew Fraser was an early supporter as well, putting soil carbon on his Party's platform for the NSW Election in 2007. The Democrats' Christine Milne gave us a fair hearing and they placed soil carbon on their platform. And a big thank you to Patrice Newell who invited the Coalition to stand a candidate for both the NSW and Federal Elections for the Climate Change Coalition.

Our greatest supporters have been the leading scientists who have appeared at our seminars and engaged with us about the issue. Their names shall be legend one day, but for now we'll keep it as a discreet general thank you because many suffered under the old regime and freedom of speech is a lesson we must all relearn. There are also the many Landcare Groups and Catchment bodies who invited us to speak to their members. The Coalition's own membership of 350 "true believers" also played a major role. 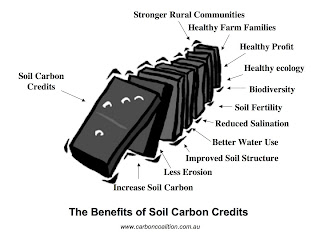 "But the one person who deserves to be honoured beyond all others for her contribution and commitment to the soil carbon solution is Dr Christine Jones. The nation owes her a debt it can never repay."

The Carbon Coalition has been almost entirely funded by the convenors and a small number of contributors. "The Coalition has received some financial support from individual donors who deserve to be cast in bronze. We also appreciate the support of commercial sponsors and welcome their involvement," says Michael Kiely. "All financial support is precious and extends our capacity to achieve our goals: higher soil carbon, regenerationof rural landscapes and biodiversity, healthy ecologies, new revenue streams for farm families, and stronger rural communities."

The Carbon Coalition was founded in February 2006 to campaign for the right of farmers and graziers to be paid fairly for the carbon they can capture and hold in their soils. The Coalition has conducted publicity campaigns, provided information services, published online sites, organised seminars and conferences, spoken to many gatherings of landholders across Australia, handled many hundreds of media enquiries, and travelled to the USA and NZ to study soil carbon sequestration. While there they assisted in the founding of Carbon Farmers bodies. The convenors of the Coalition established Carbon Farmers of Australia as a trading arm to enter the voluntary market and breakdown institutional barriers. CFA is writing its own Voluntary Soil Carbon Standard which it will submit to global standards authorities for ratification. The definitive soil carbon website Soil-C-Central is being constructed to give access to all available knowledge about soil carbon in the world, as well as virtual community facilities for meetings, discussion groups, and bulletin boards. At the same time, the convenors are seeking to offer growers the opportunity to get premium prices for 'emissions-reductions' produce by aggregating orders and using a brand story.

The benefits of soil in sequestering carbon and its place in an emissions trading scheme will be investigated by the Federal Government, Prime Minister, Kevin Rudd, announced yesterday.

In his opening address to this year's ABARE Outlook conference in Canberra, Mr Rudd said: "We need to prepare for climate change, but we also need to be ready to seize new market opportunities that come with tackling climate change. Because as well as difficult challenges, climate change will create opportunities for agricultural Australia. Today I want to announce one opportunity that the Government will be investigating: soil carbon. A few days after the Government was sworn into office last year, I visited Matt and Anna Ahern’s cattlestud in Roma with Queensland Agforce President Peter Kenny and with Tony Burke, the Minister for Agriculture. We discussed soil management practices on farms, and the scope for productivity improvements and reduced emissions from improving cropping practices. Peter’s plea to me was that if the Government wanted to do something about carbon emissions for agricultural Australia, we should focus on the soil.

"I am hearing more and more about the possible potential of enhancing the carbon stored in our soils. That is why today I am asking Tony Burke – as part of the our Australia’s Farming Future initiative – to investigate how better soil management can be part of Australia’s response to climate change. I recognise that this is a complex area and there is a variety of view points. I am told that there are significant challenges to measuring the emissions from different farming techniques and estimating the carbon stored in our soils. Those obstacles may make it difficult for soil carbon to play a role in our response to climate change, but we must examine the options. The truth is that, as in many aspects of climate change, we are only just beginning to look at soil carbon. ‘Low till’ or ‘no till’ soil management practices were first promoted for their environmental benefits through the previous Labor Government’s Landcare program that began in the early 1990s. More recently in Parliament, the Independent MP for New England Tony Windsor has been a champion of these practices for their water conservation benefits.
We now need to investigate how such practices might provide Australian agriculture with a role in new markets related to reducing carbon emissions.
…….

The challenges to the future of Australian agriculture are great, but we must not lose sight of the enormous opportunities for this sector given our natural competitive strengths. To succeed in addressing those challenges, we need to draw out the best ideas for Australia’s future from all parts of the community.
…..

We want to hear new ideas about which rural industries are best positioned to take advantage of the global consumer markets of the 21st century.

We are asking what options are possible for effective structural adjustment for rural industries and communities suffering the long term impact of climate change? And we are seeking view on what is the best way the Government can ensure the long term sustainability of rural and regional communities, including the fostering of the next generation of Australian farmers?"
Posted by Michael Kiely at 2:44 PM