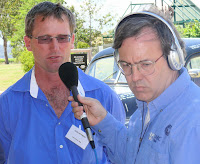 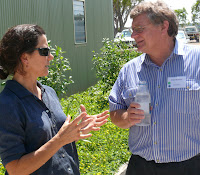 You can hear the New South Wales Country Hour's extensive coverage of the Conference by going to http://www.abc.net.au/rural/nsw/today.htm

There you will find a Real AUdio file of the show. (If you haven't got Real Audio, Google it and download it. It's free.)

Around 400 farmers from every state in Australia as well as New Zealand have converged on Mudgee in Central Western New South Wales to meet with scientists to hear about the latest advances in farming with a view to storing carbon. The topics for discussion include what price might be paid by for carbon stored in the soil or in grasses or crops that farmers grow.

Conference Organiser Michael Kiely has appealed for 10 million dollars in federal government money to continue research and prove what many scientists and farmers believe is true about soil carbon. He says the science is now showing that you can store carbon, measure and quantify it and that it helps farm production and the environment, while the multi-national companies responsible for polluting the environment are keen customers of carbon credits, but the Federal Government is not interested.

He also says the market for carbon credits is "exploding" in Chicago. 55-60 polluters are involved in the trade as a way of balancing their carbon producing activities.

Senior soil scientist with Dept of Environment and Climate Change Brian Murphy says soil carbon can be measured in the field by taking soil samples and measuring the bulk density and the carbon level in the laboratory. It's time consuming and not always accurate.

Another way is to look at land management practices to estimate soil carbon levels.

Carbon contracts run for about 5 years but storing carbon in the soil can vary with things like drought which reduces the ground cover.

Tonight the Carbon Cocky of the year will be announced. Col Seis, who lives 20 kms north of Gulgong, and Gus Hinkman from Cowra are both finalists.

Judges are looking for farmers using best practice and that includes maintaining a lot of ground cover to build carbon in the soil and farming differently with perennial grasses. Broadly described as conservation farming, the techniques results in better use of water and nutrients and dramatic improvements in the health of the soil. The farmers say they are looking after the landscape with a view to improving the productivity of the land and earning some carbon credits down the track. They believe they are heading in the right direction, with some big carbon levels increasing from 1.8 to 4 per cent.

Other farmers at the event are also committed to conservation farming. Richard Maykem from Gyra is working in a cold, wet intensive farming operation. He has tried to manage his farm holistically and says "I got interested in the Landcare movement first, then heard about rotational grazing systems coming out of Africa".

Richard Langley runs a cropping property with some livestock. He's been continuously cropping for 20 years using a stubble retention program, in line with Conservation farming principles. "We haven't burnt for 20 years...when you start you're on your own. People will shake their heads, but you'll have a gut feeling you're doing the right thing, and later others will make the change."

Some of the progressive farmers are way ahead of scientists, we're here to hear about what they're doing and why it's working. We are working with the landholders to outline five golden rules for building the carbon levels in the soil. They include maintaining ground cover, avoiding compaction of the soil, using perennial plants.

There are a number of incentives for farmers to take up conservation farming which include some developed by the Catchment Management Authority and payments to farmers from carbon trading for taking carbon out of the air.