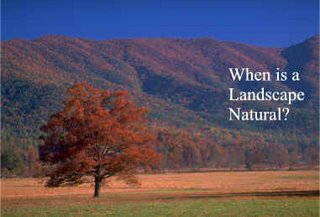 The Green movement say Australia was largely covered by forest when white man arrived, and that we should let it return to forest. But palentologists say things are a little more complicated. Global warming could be the cause of the rapid expansion of woody weeds and trees, according to Brian Fagan's study The Long Summer: How Climate Changed Civilisation. After the last Ice Age, during the long warming, open grasslands were invaded by trees at a rapid rate. Pollen records reveal that the grasslands that covered much of Europe during the last Ice Age became denser and more productive - then the trees came! Within 500 years birch forests covered much of England and Europe. "Experts believe that trees such as birch, pine, alder and hazel could advance at a rate of 1 to 2 kilometers a year over periods of five hundred to two thousand years," says Fagan. "In New Zealand, the southern beech was confined to a few sheltered locations during the late ice Age, whewn grassland and scrub covered most of the land. But the rapid warming at the end of the Ice Age had beeches completely replacing the open vegetation of earlier time within a mere three hundred years." The Green Movement now has a dilemma. Which past state of natural balance should we return to? Pre firestick farming, back before Cromagnon Man started using fire to encourage grasslands to grow sweet new shoots to attract grazing animals? Pre white arrival, before iron axes made clearing the trees easier? Fagan floats the idea of man-managed landscape 13 millenia ago: "Combine the nut harvest with systematic burning of brush and grasses to stimulate new growth and attract game and you have the elements of a carefully managed landscape." Does man have a place in Nature?
...........

The Americans are asking themselves the same question.
The following is from Forest Landowner / Jan-Feb 1999 (found at http://home.flash.net/~falline/ocrPrimeval.htm)

What did North America look like before Europeans arrived? One of our most popular, strongly held images is that of the “forest primeval.” We imagine a blanket of ancient forest, which nature maintained in equilibrium with the environment.

We also imagine native people who lived in the forests and on the plains without changing either ecosystem. Thus, another popular image is that of the ecologically invisible American Indian.

In fact, enormous areas of the continent’s forests and grasslands were very much cultural landscapes, shaped profoundly by human action.

At the time of European contact, many Indians were farmers. In the East and Southwest they raised maize, beans, pumpkins and squash to provide at least half their subsistence. Agriculture in the Americas originated more than 5,000 years ago. By 1500, indigenous people had cleared millions of acres for crops. Everywhere in the Americas they also regularly set fire to hundreds of millions of acres to improve game habitat, facilitate travel, reduce insect pests, remove cover for potential enemies, enhance conditions for berries and drive game.

Vast areas of the forest landscape in both the West and East were open, park-like stands shaped by frequent, low-intensity fires. In New England, Indians burned the woods twice a year. Roger Williams wrote that “this burning of the Wood to them they count a Benefit, both for destroying of vermin, and keeping downe the Weeds and thickets.” John Smith commented that in the forests around Jamestown, Virginia, “a man may gallop a horse amongst these woods any waie, but where the creeks and Rivers shall hinder.”

In many cases frequent forest burning created grasslands where forests otherwise would have existed. Prairies extended into Ohio, western Pennsylvania and western New York. In Virginia the vast prairie of the Shenandoah Valley covered more than 1,000 square miles. Ecologist R.C. Anderson writes that the eastern prairies and grasslands “would mostly have disappeared if it had not been for the nearly annual burning of these grasslands by the North American Indians.”
Posted by Michael Kiely at 8:40 AM