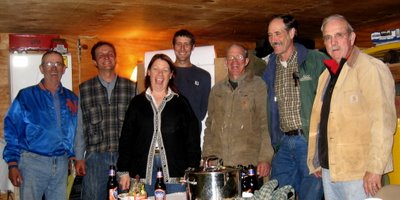 The Carbon Coalition Against Global Warming was launched in the USA last week (on last Friday night) at "Maplewood Farm", Highgate, Vermont. Present for the inaugural meeting were (from left to right) Ted Yandall of "Cimarron Farm", Stanton, Vermont, Abe Collins, Eric Nowel of "Maplewood Farm", Louisa and Michael Kiely, Ridgeway Shinn or Bakewell Reproductive Centre of Massachusetts, and Gerald Fry, grassfed beef geneticist of Arkansas. This marks the internationalisation of the Coalition and the next stage of the grassroots campaign to have soil carbon credits become a reality.
The Coalition now has the outline of a trading strategy which will be discussed with the Council in Australia prior to a launch towards the end of the year. (More on that later.)
Posted by Michael Kiely at 7:21 PM