It's started! We have fired the first shot in our campaign to have soil carbon sequestration recognised as tradable carbon credits. We won't know for 3 years what degree of carbon sampling will be acceptable to the market, we are taking a conservative approach and measuring deep and measuring often. One metre deep and a core sample per acre. 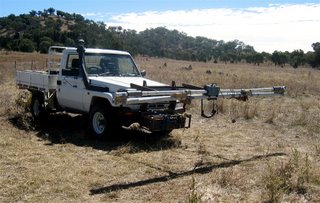 To map the carbon in the topsoil at Uamby, we have commissioned The Center for Precision Agriculture, an august body of soil scientists from Sydney University, to do a pretty standard mapping exercise, using both an EM31 and an EM38 device and a Gamma machine which measures the various radioactive signatures to a depth. 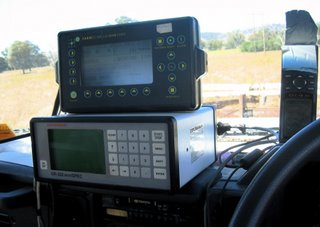 The EM is a standard soil mapping instrument that can give us a guide as to where we should drill for core samples. The Gamma is still experimental but we are told that it has achieved good results in estimating carbon. (I will blog these devices later once I've done my homework.) 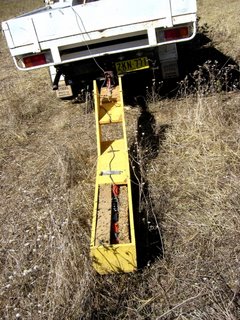 Why sample 100cm deep when 30cm is advised?
The 1m of core sample that we have proposed is insurance. 1cm to 30cm was to be sampled in 10 increments to get the data that DR Christine Jones said would be useful i.e the three horizons to see the relative activities of each level. The 30 to 100 cm horizon was taken purely to complete the data set. 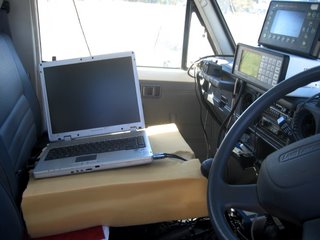 Our largest problem at the moment is finding someone to test the soil. It seems the cheapest we can find is $36 per sample, making it unrealistic for the 3 horizons to be tested. We are not giving up on this though as it is very worth while having the top 30 cm separately tested. 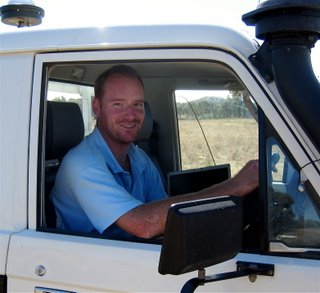 From our research, the approach to carbon "Measurement, Monitoring and Verification" adopted across the world varies from a mere estimation based on computer modelling aall the way to our over-cautious approach. We are adopting our approach because we have got to convince the marketplace of our bona fides.
We'll keep you informed.
Driving the scanning rig is Michael Short from The Center for Precision Agriculture. Michael stayed with us for several days and had several adventures along the way. For instance, he drove across a rabbit warren which collapsed under him!
Posted by Michael Kiely at 7:08 AM