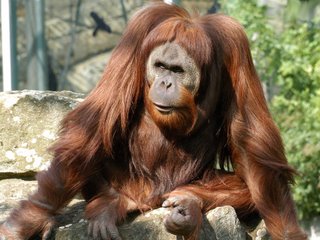 The only place you'll see orantugangs like this is in a zoo because environmentalists are causing his forest home to be devastated.

Environmentalists and governments are "creating a market for the most destructive crop on earth", according to green activist George Monbiot in an article in the Guardian (6/12/05).
Palm oil is the cheapest source of biodiesel and the rush to meet demand from the EU has resulted in the clearing of millions of hectares of rainforest in Malaysia, Indonesia and Borneo. Biodiesel plants are popping up all over South East Asia to consume the crop that is replacing native forestlands.
Recently Friends of the Earth reported that between 1985 and 2000, the development of oil-palm plantations was responsible for an estimated 87% of deforestation in Malaysia. In Sumatra and Borneo, some 4 million hectares of forest have been converted to palm farms. Now a further 6 million hectares are scheduled for clearance in Malaysia, and 16.5 million in Indonesia.
"Almost all the remaining forest is at risk. Even the famous Tanjung Puting national park in Kalimantan is being ripped apart by oil planters," says Mr Monbiot. "The orangutan is likely to become extinct in the wild. Sumatran rhinos, tigers, gibbons, tapirs, proboscis monkeys and thousands of other species could go the same way. Thousands of indigenous people have been evicted from their lands, and some 500 Indonesians have been tortured when they tried to resist. The forest fires which every so often smother the region in smog are mostly started by the palm growers. The entire region is being turned into a gigantic vegetable oil field." Emotive language. Oh, the irony of it all!
Posted by Michael Kiely at 8:44 AM