The Soils War Is Over 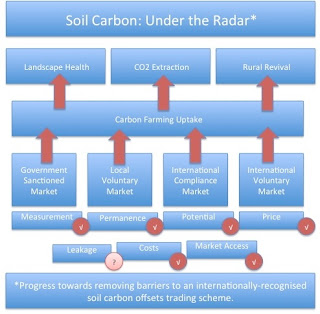 The Soil Carbon movement has been flying under the radar while Australia is on the verge of the first internationally-recognised methodology for creating carbon credits from increases in soil carbon in a developed country. The Methodology is being prepared by the Department of Industry, Innovation, Climate Change, Science, Research, and Tertiary Education (DIICCSRTE), in consultation with a reference group of expert carbon farmers. It is anticipated that the methodology will be available in around 9 months.

*Measurement: The CSIRO has developed an affordable method for sampling soils that eliminates the need to know the spatial variation. Soil scanning technology is also coming available and in the process of commercialisation.

*Permanence: A “conservatism buffer” that underwrites each tonne sold could work like a mutual society using a collective self-insurance scheme that spreads the risk across all growers in the program and returns the premium paid in increments as the risk is reduced by time passing over the 100 year period. The carbon measured in the 30-100cm profile could contribute to the buffer where the program specifies that only carbon found in the top 30cm be traded. (See next post.)

*Potential: The rate and quantum of sequestration has been under-estimated to date due to the practice of studying the performance of practitioners of management techniques without regard to their skill level. When the focus is upon the high-performance land managers the “potential” – as in the best results recorded – sets the bar much higher than most studies to date by up to a factor of 10.

*Positive List: The requirement for scientific trials to prove the efficacy of sequestration techniques before they can be considered for a methodology is redundant when, to earn offsets in the field, the grower’s performance must be demonstrated by robust scientific measurement methods. The DOIC has loosened its requirements, moving beyond the need for 3-year trials (to demonstrate that the activity works). It now requires that there be support for the activity in published peer-reviewed data and even a more general "robust science".

*Market Access: The ”Kyoto” Mandatory Market has traditionally attracted much higher prices than the non-Kyoto “Voluntary” market because the former had the highest level of integrity of abatement due to the regulatory obligation driving the purchase. Soil carbon offsets were unable to be sold on the mandatory market unless the Government agreed to count emissions from drought and bushfire as part of their annual emissions inventory. Australia led the international effort to have the non-anthropogenic (non-man-made) emissions requirement (Articles 3.3 and 3.4) changed. All CFI offsets are now “Kyoto” credits.

*Low prices: The current low price for offsets is not expected to persist for three reasons: 1. The Global Financial Crisis dragged European prices down. The Crisis is expected to have worked its way through the system in 5 years time when the first vintages of offsets will be available for trading. 2. The glut of offsets that has depressed European prices is expected to be resolved by a combination of forced retirements and increasing demand when the Chinese market opens in 2015. 3. Growers can “bank” their offsets and choose when they want to sell.

*Leakage: The Methodology Working Group is investigating methods of accounting for emissions caused by an abatement activity, such as increased methane due to increased stock carrying capacity after introducing grazing management.
Posted by Michael Kiely at 7:23 PM