The National Carbon Cocky Award is judged each year during Carbon Farming Week. It was inaugurated in 2007 as a way to acknowledge pioneering Carbon Farmers and put a spotlight on new techniques for avoiding or absorbing Greenhouse Gas emissions. Finalists are thought-leaders of Carbon Farming. When the world’s leaders cannot agree, the people must lead. In their everyday working life Carbon Farmers point the way forward. They are our hope for the future. Winners will be announced at the Gala Awards Dinner, Dubbo RSL Club, 23rd October, 2012. 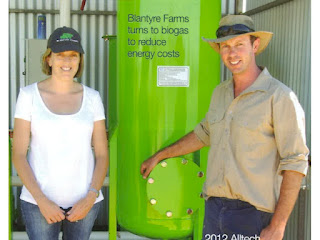 •  Michael & Edwina Beveridge of Blantyre Farms near Young recently installed a methane digestion system at both piggery sites. They are the first people in the Australian pig industry to complete a commercial digestion system.
•  Their application for the right to earn carbon credits under the Carbon Farming Initiative was approved yesterday.
• Normally methane is released into the atmospheres from the anaerobic decomposition of pig manure in settling ponds. A methane digestion system captures this gas produced under a pond cover and burns the methane. The methane gas when burnt is converted to carbon dioxide. Methane has a Global Warming Potential of 21 versus carbon dioxide at 1; ultimately methane is 20 times worse than carbon dioxide.
• The Beverages have a 2000 sow piggery .  At any point there are about 20-25,000 pigs on hand. There are two separate piggery sites, a breeder and a grower site.
• To set up this system a new dam was constructed at each site, they hold 50 days worth of effluent. This dam at the grower site, holds 15ML, is over 100m in length, 40m wide & 5m deep. The breeder site dam is about a third the size.
• The dam has been covered with 2mm LDPE covers. There is a flare on each pond, this is back up for the generators and will burn the methane, if the generators stop. The gas runs from the pond through a scrubber, which cleans the gas of impurities & then a chiller which removes condensation, it is then piped to the generator.
• The generators. are containerized, to reduce noise and allow easy transportation. There are 2 units at the grower site & 1 at the breeder site. In summer all three will operate, in winter it is anticipated that there will only be enough gas to run 1 at each site. This also provides a spare, which we can move from site to site if required.
• The methane gas is a fuel source for a converted diesel engine, which is coupled to a generator. Blantyre has 3 x 80KW generators.
• Both separate digestion systems are connected with a pipe that runs for 3.8km & goes under a main road. This allows flexibility & will keep the gas up to the breeder site which uses the most power, but makes less gas.
• Blantyre expects the project will have between a two and three year pay back period. The greatest saving has been in producing power for their own use, as electricity charges are about 20c/kW. There is a smaller benefit in selling power to the grid, where Blantyre receives about 3.5c/kW.
• Australian Pork Limited, the industry body has been proactive with the Carbon Farming Initiative and has registered a methodology “for the destruction of methane generated from manure in piggeries”. This methodology has been approved.