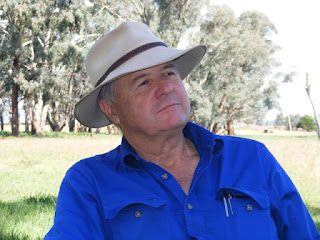 Bruce Ward introduced us to Holistic Management and the methods of Allan Savory. He changed the lives of many people, far more than the 2500 he personally trained. He was passionate and forthright. I saw him rip into an academic or agronomist or extension officer at one of our soil science summits who trotted out the now discredited factoid that methane from cattle was the big problem with Global Warming, and that reducing stock numbers and sowing the rangelands down to soy beans was the solution. It wasn't the animals, he said, but the way they were managed. Bruce was a visionary. He was one of the first to move on soil carbon after we returned from the US in 2006 when we met Prof. Rattan Lal. Bruce felt the urgency. In 2007 he co-founded Soil Carbon (Australia) Pty Limited, a company dedicated to building awareness around the vital relationship between soil carbon, soil health and land management, specifically regarding grazing management. He and Tony Lovell blew the loudest horns as we marched around the walls of Jerico. Bruce was a social revolutionary in many ways, liberating farmers from outmoded ideas that degrade the natural capital on which civilised society depends and giving hope to those who feel trapped in the vortex. He will be remembered as a leader for the times. Comes the times, comes the man.

Posted by Michael Kiely at 7:41 AM