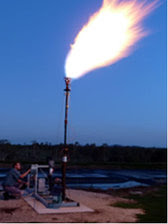 Australian pork producers have been cleared to start earning Carbon Credits under the Carbon Farming Initiative by cutting emissions from manure. They can also slash their power costs by turning the emissions into fuel. Capturing methane at the point of release, farmers can burn it by ‘flaring’ or they can go further and use it to provide on-farm energy to run equipment and heating.

Burning Methane (CH4) produces CO2 that is emitted instead. Methane has 24 times the Global Warming Potential of Carbon Dioxide. The farmer earns 24 tonnes of CO2 offsets for every tonne of Methane captured and burned.

The manure management methodology that makes these opportunities possible is the first released under the Carbon Farming Initiative and was launched yesterday by Agriculture Minister Joe Ludwig and Parliamentary Secretary for Climate Change and Energy Efficiency Mark Dreyfus. The project involves retrofitting an impermeable cover and sludge management system to an existing unheated anaerobic pond at a southern Queensland breeder unit piggery.

The cost of installing basic methane capture infrastructure is likely to range from around $75,000 to $200,000 depending on the size of the piggery. The Australian pork industry suggests that by using the methodology, producers could increase the return on each finished carcass by around $3.45. Preliminary trials suggest the payback period for this infrastructure ranges from 18 months to five years in smaller operations. 680 commercial piggery operations in Australia stand to benefit from the CFI via this process.

A trial was conducted at a piggery in Grantham in Queensland. Project manager Alan Skerman said the methane released from ponds of swine waste could be used not only to heat a piggery's sheds, but also to create usable energy through an electrical generator. "There's the potential there to reduce the farm's use of LPG by about half, substituting biogas for the LPG that's used for heating the piggery sheds," he said. "As well as those financial benefits, the owner can get extra income through carbon credits…. But there's the potential for the widespread roll-out of this technology in the pig industry."

The methodology was developed in collaboration with the Australian Government, the pork industry and Queensland DPI scientists, and assessed by the independent Domestic Offsets Integrity Committee..

Carbon Farmers of Australia have a soil carbon sequestration methodology before the Committee which could deliver benefits to 130,000 Australian farmers.

Posted by Michael Kiely at 2:01 PM

Australian farmers should be earning 72 tonnes of CO2 offsets for every tonne of Methane captured and burned because they are reducing near-term danger by 72 times rather than 24 times.

In the words of Nobel Laureate Dr. Kirk R. Smith, it produces the undesirable result of "spending more money to protect people thousands of years into the future and ignoring the needs of ourselves and our children."


See the video at http://www.global-warming-forecasts.com/methane-carbon-dioxide.php