Beware the Myths of Trade

"Farmers will be reluctant to lock themselves into any changes in land use or land management, particularly where this involves them taking on liabilities if soil carbon later declines (such as due to prolonged drought)." These words appear in "The Low Carbon Growth Plan for Australia", a report released last week by ClimateWorks Australia. This is a myth repeated by the. Every soil carbon trading system that has existed or is being planned right now involves three fundamentals: 1. Aggregation - the collecting together of growers who individually do not have enough tonneages to sell to deal with the market alone. 2. Buffer Pooling - Growers are required to contribute additional tonnes to act as self-insurance should the worst happen. If an individual's losses are greater than their buffer stock, the collective pool carries them. 3. Limited contract duration - no possibility of 100 years is entertained for soil sequestration. Kyoto doesn't rule. 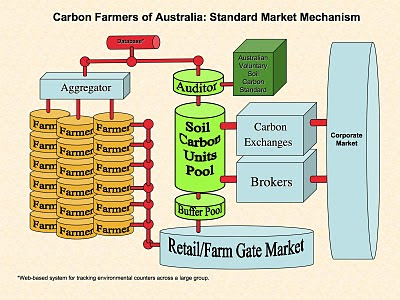 [The Buffer Pool acts as a 'collective self insurance program' so no Carbon Farmer should stand to lose if drought or fire causes carbon losses.] NB. These concepts are taught as part of the Carbon Farmers of Australia "Practical Carbon Farming Workshop. Call 02 6374 0329 to find out when the workshop will be in your area.
Posted by Michael Kiely at 6:42 AM