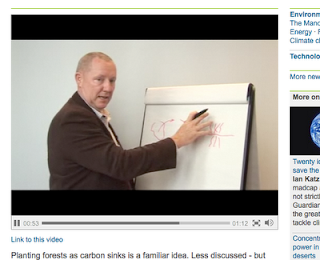 We need your vote for the Soil carbon entry in the Manchester report. Vote Here.

Bruce Ward and Tony Lovell are flying the flag for grassland restoration in the Guardian Newspaper's "Manchester Report". Over the weekend of July 4 and 5, twenty finalists (including Tony and Bruce), made 30 minute presentations to a panel of four judges, introducing Soil Carbon to the panel and the audience.

The panel was led by Lord Bingham, the former Lord Chief Justice of England and Wales, Bryony Worthington, an advisor and policy expert on climate change to the British Government, Dan Reicher, a Californian director of Google, and Chris Goodall, author of several major books on climate change and a freelance journalist.
You can see a 1-minute grab summarising our presentation by going to
http://www.guardian.co.uk/environment/2009/jul/13/manchester-report-grasslands
The panel met and boiled the 20 presentations down to a final list of 10. Soil Carbon made the cut.

Now there is a public vote 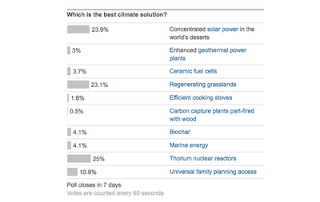 Bruce explains why they entered:
"Tony and I are seriously concerned that most people throughout the world are totally unaware of the need for farmers to move from being 'part of the problem' to become recognised as a vital 'part of the solution'. Soil Carbon provides that opportunity, so long as policy makers allow it. Time is running short, and Copenhagen is not far away. The die will be cast one way or the other at that time, and we want it to be cast the right way. We may need more science before we get the detail right, but it is clear that the science can now be done. That is a major step forward from only 2 years ago when we were consistently told it could not be done."
Posted by Michael Kiely at 8:58 PM