The Carbon Coalition activities for 2009 have been recognised as being officially part of the United Nations' International Year of Planet Earth. The aim of the Year is to foster outreach and research activities with the single purpose of raising worldwide public and political awareness of the potential of Earth sciences for improving the quality of life and safeguarding the planet, making it a better, safer, healthier and wealthier place for our children and grandchildren.
Carbon Coalitions events and activities which will carry the IYPE logo include the 2009 Carbon Farming Expo & Conference, a global webcast multimedia virtual conference connecting soil carbon specialists across the world, the launch of a mega-website, and smaller events around the nation. Of course, the world famous Carbon Cockie Competition (which is going national) will also come under the IYPE.

The International Year of Planet Earth was initiated by the International Union of Geological Sciences and the United Nations
Educational, Scientific and Cultural Organization (UNESCO). The Year also enjoys the full political support of 192 UN countries. By the end of 2008, National Committees have been established in 76 countries and regions in the world.
One of the 10 themes for the Year is "Soil: Earth' Living Skin". The Carbon Coalition has already featured members of one of the major partner organisations, the International Union of Soil Sciences. Keynote speakers at the 2008 Carbon Farming Expo & Conference included Professor Rattan Lal and Professor Alex McBratney, both of whom were awarded the highest honours by the IUSS. 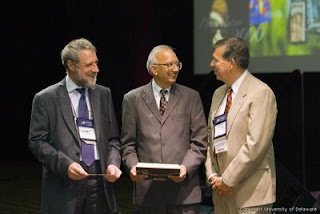 Rattan Lal, director of Ohio State's Carbon Management and Sequestration Center and a professor with the School of Environment and Natural Resources, was the recipient of the 2006 Liebig Applied Soil Science Award. Named in memory of German scientist Justus von Liebig -- known as the “father of the fertilizer industry”. 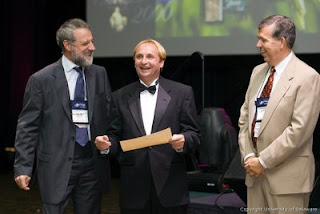 Alex McBratney was awarded the Webster Medal 2006 18th World Congress of Soil Science. Alex. is Professor of Soil Science and Pro-Dean in the Faculty of Agriculture, Food & Natural Resources at the University of Sydney. He was instrumental in the setting up of the Working Group (now commission ) on Pedometrics and the new Working Group on Digital Soil Mapping.

About this logo: In 2002 the German Ministry of Education and Research in 2002 instigated the very successful Jahr der Geowissenschaften. The logo used in the national event forms the basis of the International Year logo, by kind permission of the German Ministry. This consists of an inner circle (red) representing the solid Earth, then the biosphere in green and the hydrosphere in dark blue, above which is the pale blue atmosphere, all constituents of the Earth System.
Posted by Michael Kiely at 5:36 PM