AT LAST SOME SANITY ON SOILS: Minister Burke call for Kyoto change 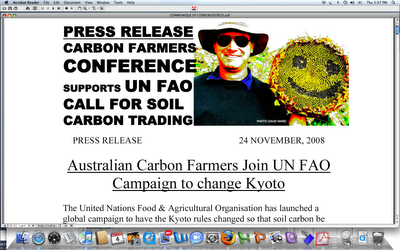 Minister for Agriculture Tony Burke is calling for changes to Kyoto to allow soil carbon to be recognised and rewarded. "Kyoto as the initial agreement was important but we should not pretend that it was a perfect landing place," he told Lucy Sculthorp in The Land. "The fact that trees get counted but other green things don’t when it comes to carbon sinks we know is scientifically wrong. You don’t have to get past year eight at school science before you know that it's the 'green bits' that are doing the photosynthesis and yet well-managed pasture doesn’t get counted, but trees do." Mr Burke said the government would set down a "framework" to be part of a global carbon pollution reduction scheme which would put Australia's primary producers "on a much better footing than under the current accounting rules".
On 24 January a working group of the 2008 Carbon Farming Conference and Expo, organised by Carbon Farmers of Australia, released the following statement: “We confirm: 1. that agriculture can respond immediately to sequester carbon
through capture and storage. 2. that agriculture should be provided with an opportunity to support
the national and global climate management effort and 3. that soil carbon should be included in voluntary offset markets."
Tony Burke agreed that the current Kyoto rules are not fair for the farm sector, arguing there is no reason why well-managed pastures not be considered for their carbon storage capabilities.
The next international agreement on climate change, due to be thrashed out at Copenhagen in 2009, needed to match new science which would help bring more agricultural production into the carbon-capture fold, said the Minister."As we move through the international negotiations on climate change, there is a principle which helps in being part of the global solution and is a very good principle in the interests of agriculture as well. That is, to try as much as possible to get the accounting mechanisms internationally to match the science." (Good Science.)
"The Minister's announcement might have been coincidence, but I'd prefer to believe that Minister Burke is just very responsive," says Michael Kiely, Carbon Farmers of Australia.
Posted by Michael Kiely at 4:56 PM