Why we want Agriculture “in” the first stage of trading

This is the first of a series of reports on the Australian Farm Institute’s “Agriculture, Greenhouse and Emissions Trading Summit” this week.

While a communiqué from the attendees at the Conference claimed that they were committed to being “in” the trading scheme, they put so many caveats and conditions on entry that Agriculture could not be ready in time for the 2010 start date. Ironically, participants complained that agriculture was seen as bellyaching and asking for handouts and special deals. They then went on to ask for special consideration: transitional arrangements in the form of the old AGO’s “Best Management Practices” rewarded by payments from the Government. 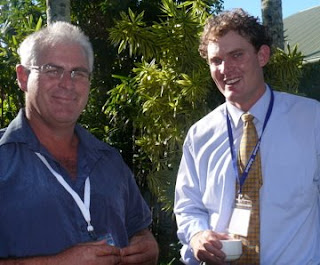 Tim Wiley (who was not officially tattending, but we can reveal that he is Development Officer with the Department of Agriculture WA) met Justin MacDonnell from the Cattle Council of Australia. Justin was amazed to meet the negativity he encountered in official circles after attending the Coaliton's Carbon farming Conference in 2007.

As the Coalition suspected when this BMP ‘Trojan Horse’ was first produced by the AGO in 2007, it could deliver farmers into the hands of the Government. There is some evidence for this:

1. Best Management Practice means Carbon Farming without the returns. You capture and store the carbon, but you cannot sell it. Instead the Government may have access to it for meeting its considerable Kyoto liabilities. (Remember what happened to the 1 million hectares of ‘avoided deforestration’ used to meet the Howard Government’s targets.)
2. Transitional arrangements can easily become permanent, especially when their duration depends on the ability of science to solve the traditional ‘difficulties’ surrounding emissions. (And its enthusiasm for the job. Michael Robinson)
3. Stewardship payments always come with shackles, with the Government able to stop the flow at any time. A change of government and all bets are off. Whereas carbon is something you grow and sell. The farmer stays in control of the transaction. 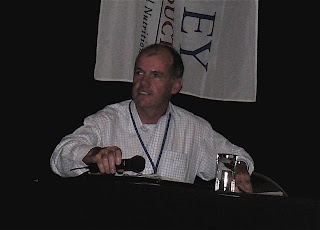 The communiqué from the AFI Conference was driven by fear based on ignorance: Many of the people in the discussion groups seemed to believe that farmers would be forced to offset all their emissions from Day 1, which is wrong. Under a cap and trade system, the emitter commits to reducing emissions in stages, not all at once. And if the farmer has access to the soil carbon to offset their methane and nitrous oxide liabilities, we remain confident that Agriculture will survive and thrive as it transitions to the Carbon Age.
Posted by Michael Kiely at 7:51 PM