Lal calls on scientists to work towards trading soil C 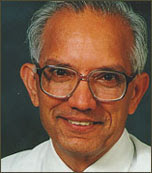 It doesn’t sound much like a clarion call, but if you know Dr Rattan Lal’s normally reserved character, he is very animated when he says: “Soil and tillage researchers must be proactive in this important theme.” The key word is ‘proactive’. Its use is tantamount to a plea for scientists to come out of the laboratory and become activists in the soil carbon debate. The “theme” of Dr Lal’s editorial in Soil & Tillage Research is to be found in the title: “Farming carbon”.

Dr Lal has the gloves off when he describes the President’s favourite climate change solution, the burial of captured CO2e in deep underground caverns or deep in the ocean. “In contrast to the high economic and environmental cost of the ‘work in progress’ technologies of oceanic and geologic sequestration, [soil carbon sequestration] is an opportunity that the world cannot afford to ignore,” he says. “C-sequestration in the terrestrial biosphere (eg. forests, agricultural soils) is considered a low-hanging fruit, a win-win strategy and a bridge to the future until low-C or no-C fuel sources take effect.”

Lal sets a benchmark of between 30 and 40 tonnes of carbon per hectare for even very degraded soils: “Soils with severely deplete SOC (soil organic carbon) pool could have lost at much as 30-40Mg C/ha which also constitutes the theoretical or potential sink capacity.”

Here are the highlights of his editorial:

• “The process of [soil carbon sequestration] is appropriately termed ‘farming carbon’ or ‘growing carbon’ when C sequestered in soil can also be traded as any other farm commodity (eg. corn, soybean, milk, meat, poultry).”

• “”The commodification of soil/terrestrial carbon may provide the much needed incentives to promote adoption of recommended management practices restore degraded soils while improving the SOC pool.”

“… the ever-growing need of increasing agronomic production to meet basic needs of 830 million insecure food-insecyure people, mostly in Subsaharan Africa and Southern Asia…. There is also an important issue of stewardship of soil resources,” he says.

• Lal quotes a US Federal Bureau of Soils document which maintained in 1878 “the soil is the one indestructable, immutable asset that the nation possess, and one resource that cannot be exhausted.” This attitude led to the legendary dust storms when the mid-West of the USA lost thousands of tonnes of top soil.

• “Taking soils for granted… led to the Dustbowl of the 1930 in the US and to a wide spread distribution of degraded and desertified soils, civil unrest and political instability, and to collapse of civilisation as we know it.” (Lal cites Jared Diamond’s book “Collapse”.)

• “It is important to enhance collective/community soil/land ethic that incorporates understanding of ecology and sustainable use of soil based on recommended management practices and the traditional knowledge and wisdom. There is a need for paradigm shift on new perspective on soil tillage and the value of soil as a whole.”

• Dr Lal ask the question: “what price in the loss of ecosystem services are we willing to pay for producing modern biofuels from crop residues?” He points to ‘the possible adverse effects of crop residue removal on soil quality, agronomic productivity, and sustainability of soil and water resources. The severe and widespread problem of soil degradation and the attendant agrarian stagnation/deceleration, are caused by indiscriminant removal of crop residues (for competing uses as fodder, fuel, thatchingmaterial) and uncontrolled grazing.”

• “The possibility of trading soil C credits offers a new hope to small land holders of Africa and Asia to receive payments for services to society rather than receive handouts.”

• Lal points to the shift in US politics and the enthusiasm for cap and trade in the world community, including California’s own trading system. “Thus, coming events are casting their shadow in this important and emerging field of immense significant to soil science, and the researchers must out their act together before the train departs the station.”

•”There is a strong need for developing a methodology for assessing C credits in soils and terrestrial ecosystems.. The principal challenge to soil scientists lies in: (i) upscaling the point data to landscape, farm, watershed or a region comprising 100,000-200,000 ha, (ii) evaluating changes in the soil C pool (expressed in Mg/ha/year) with reference o a baseline for a cultivated land unit comprising a large farm community, and (iii) verifying that the C thus sequestered in soil is permanent and not re-emitted because of changes in land use or management practices.”

• “Determining what is soil worth, considering all ecosystem services and looking beyond the short-term economics, I important to the commoditification of soil C.”

• “The strategy of soil carbon sequestration is essential irrespective of the debate on climate change. The depleted SOC pool must be restored, come what may.” Lal reports it is estimated that between 24 and 40million tonnes of additional food grainscan be produced annually if the SOC pool in developing countries can be grown by 1 Mg/ha/year.

Dr Lal has sounded the call to arms.

HERE IN AUSTRALIA WE ARE AHEAD OF THE REST: Our scientists have already - for 12 months - been engaging with farmers to find solutions to these issues. The Carbon Coalition would like to acknowledge Brian Murphy, Jeff Baldock, Andrew Rawson, John Friend, Greg Chapman, Richard Green, Albert Oates, YN Chan, Alec McBratney, and all scientists who have given us encouragement and support.
Posted by Michael Kiely at 8:37 PM