AG SCIENTISTS SHOULD BE FARMERS (AND VICE VERSA) 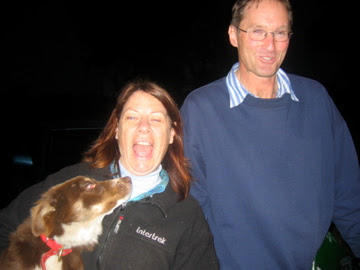 MEET ALBERT OATES. THE SCIENTIST/FARMER. (OR FARMER/SCIENTIST.) He is NSW DPI Soil Physics Technical Officer on the $246,000 study of the role of pastures in locking up carbon under a range of management practices in central and southern NSW. He visted us this week to check "Uamby" out for suitability as a test site.

Albert is a scientist who raises cattle on a family farm in the Wagga district.
In the DPI's press release, ALbert said it was important the positive role of pastures in sequestering carbon within the soil be better understood and measured.
“Keeping carbon in the soil as organic material reduces the amount of carbon dioxide in the atmosphere. And increasing soil organic material improves the physical, chemical and biological properties of the soil,” he said.

He said Australian farmed soils were generally relatively low in soil organic carbon. “It’s not easy to accumulate organic material in a hot, dry climate under continuous cropping. The pasture phase provides the opportunity to rebuild organic matter levels in the soil. Soils under permanent pasture may have the greatest potential to lock-up carbon dioxide as soil organic matter.”

The three-year project will be led by Soil Physicist Dr Yin Chan with input from our own Soil Scientist Dr Brian Murphy* of DNR and ALbert. The researchers are keen to hear from farmers who may have paddocks with a known history suitable for inclusion in the study.“Of particular interest would be paired paddocks, which allow comparisons to be made. Examples include cropped versus old perennial pasture, annual pasture versus perennial and set-stocked versus rotationally grazed.If a farmer has a paddock likely to be of very high organic carbon status that would also be of interest.”

*Brian Murphy has been a driving force behind the SOIL SCIENCE SUMMITS (meetings between soil scientists and farmers to share knowledge and build understanding). Brian's standing in the scientific community is well recognised and we are in his debt. The Summits - there have been two one-day events so far - are held to address the yawning gap in understanding out of which flawed methodologies emerge (and farmers' misunderstandings). The third summit is an expanded event: a world first. CARBON FARMING EXPO AND CONFERENCE, 16th and 17th November, 2007, AREC, Mudgee. Call 02 6374 0329 for information.
Posted by Michael Kiely at 8:18 AM