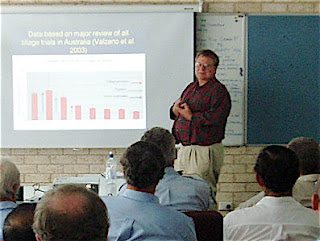 [Dr Brian Murphy presents the current science about soil carbon to the first gathering of scientists and landholders on the subject that we are aware of. Brian's presentation was 'amazing', said one farmer.] 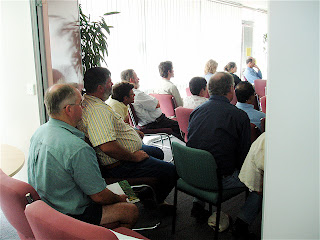 
The summit titled "Practical Ways of Getting Incentives to Farmers Storing Carbon in their Soils" had its origin in a meeting between the Carbon Coalition, leading Department of Natural Resources soil scientist Dr Brian Murphy, and Central West CMA Soils Specialist John Lawrie. The gap between what farmers expect of scientists and vice versa dominated the conversation. Four months later, on 22nd March 2007, the great experiment was staged. Would exposure to each others' issues and agendas lead to solutions for both sides? Yes.

"The main objective is to discuss how the Central West CMA can help facilitate payment of funds to encourage farmers to increase the storage of carbon in their soils," said John Lawrie in his introduction. "We believe that practices that our best farmers are now using including no-til farming, control traffic farming, cover cropping, pasture cropping and advanced methods of stock grazing management are having beneficial effects on the health of our soils and maintaining or increasing levels of carbon in the soil."

"We also hope to develop simple pragmatic methods of assessing the quantity of carbon that can be stored using these improved management systems. We hope that we can come up with some management principles that we can use to develop suitable incentive benchmark payments to farmers while better measurement practices are being developed.
For example. we would like general consensus from soil scientists and farmers that more carbon can be stored in the soil incrementally if the soil is not plowed; burnt; stubble left ungrazed; pasture cropped; cover cropped etc. This will help us provide guidelines to brokers who have access to carbon sequestration funds and are developing projects to distribute this funding to worthy farmers. It would also be useful if we can come up with a method for working out the magnitude of increases in carbon that are possible in differing climatic zone and soil types in our catchment."

There followed Michael Kiely's presentation on the critical role of soil in the climate change issue. "I feel like President Kennedy must have felt when he asked the scientists to put a man on the Moon to deliver a 'shock and awe' message to the Russians. 'The moon's up there. We're down here. We just pop a guy up there... It can't be that hard.'" But the science of accurately measuring soil carbon is hard, because soil carbon is mercurial, fluxing in and out of soil with night and day, rainfall events, etc.

Greg Chapman then gave an amazing presentation on "Pragmatic ways of monitoring carbon stored". He is the leader of the NSW Department of Natural Resources's soil mapping and soil information program and has wide experience in soil survey, land evaluation and the identification of soil limitations to land use. He described a system of national protocols for long term monitoring of our soils, that drills down to the individual property.

The meeting then mapped out a continnuum of soil management practices that could be given values for a proxy trading system. It was decided to meet again 3 months later. Meanwhile an action team will work up the recommendation.

The meeting ran overtime, such was the enthusiasm of the attendees.
Posted by Michael Kiely at 4:39 PM