It had to happen. The vested interests of traditional agriculture are fighting back. In a letter to the editor of The AUSTRALIAN FARM JOURNAL, a leading rural business consultant David Sackett attacked Carbon Coalition Councillor David Marsh for being a "carbon farmer", accusing him of running a 'subsistence farming' operation because he wasn't driving the soil to maximise short term profitability. He complained that the article in the Journal which featured David's extraordinary performance over the three years of drought did not provide enough financial data. He claimed David was understocked when David was stocking to the capacity of the landscape. In other words, Sackett complained that David did not destroy and deplete the soil by running his property hard, spreading artificial fertilisers which increase the acidity of the soil, lead to algal blooms in waterways, and kill the natural microbial life in the soil that builds carbon.

As David is too much a gentleman to engage in a spat, and as it is an attack on carbon farming concept, the Coalition wrote a letter in reply: 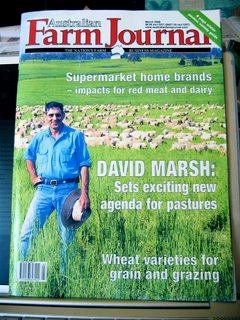 David Sackett’s contribution to Australian agriculture is well known, but his dismissal of David Marsh’s approach to farming is unworthy of him.
David made a profit in the three worst drought years in living memory. (How many farmers can say that?) He did not have to handfeed at all. He did not lose groundcover in that period. He therefore did not have to resow pastures after the drought, a considerable saving in capital expenditure.
He did it by “matching livestock carrying numbers to the carrying capacity of the landscape” and by keeping input costs down. Gross turnover is irrelevant. Profit is what counts.
Input costs have rocketed ahead of prices that farmers can get for their produce. At the same time the natural resource base on which they depend for future profits is rapidly declining.
Environmental entrepreneurs like David are interested in tomorrow’s profits as well as today’s. If businesses benchmarking in the top 5% of production economic performance were forced to account for the real cost of their operations (deferred cost of depeleted resource base), their balance sheets would look very different.
This is not an ideological divide. It is a paradigm shift. There can be little understanding between people operating under different paradigms because the past cannot understand the future and the future cannot talk to the past in terms it will understand. Farmers like David are simply getting on with learning how to increase profits while improving their resource base. They are not insisting that others be like them.
David is a member of the Council of the Carbon Coalition Against Global Warming, a new farmers’ movement which aims to enable farmers to sell carbon credits on the global greenhouse emissions market, based on the carbon sequestered in agricultural soils. This development will significantly alter the economics of farming as well as attitudes to the natural resource base.