Trees are not always good carbon sinks! Nature magazine let the cat out of the bag in 2002: planting trees is not the best way to fight global warming. Growing grass is.
Nature reported Duke University scientists saying that trees and shrubs growing in areas of good rainfall are less effective storehouses for carbon than native grasslands. Studies that found for trees ignored what was going on below ground, said Robert Jackson, associate professor of biology at Duke University. Under wet conditions, trees and shrubs can cause soil to lose carbon, effectively negating any sequesteringof carbon in the trees themselves.
``The study suggests that we need to look very closely at what's below ground before we add up just what's stored above ground in tree trunks,'' he said. 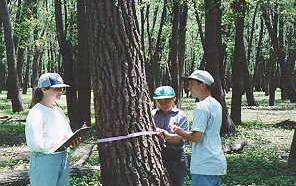 Six pairs of adjacent western grasslands were studied in the US. In one of each pair, trees and shrubs had invaded sometime in the last 100 years. In the drier locations, the "regrowth" led to an increase in the amount of carbon locked up in the soil. In wetter areas, however, the opposite happened.
Professor Jackson believes, "Grasses are deceptively productive. You don't see where all the carbon goes so there is a misconception that woody species store more carbon. That's just not always the case.''
The study helps dispel the notion that humans can plant their way out of global warming, said Daniel Becker, director of the Sierra Club global warming and energy program. ``We are going to need to tackle the industrial sources of emissions head-on rather than just plant a bunch of trees,'' Becker said.
Posted by Michael Kiely at 10:59 PM