Here’s to the crazy ones 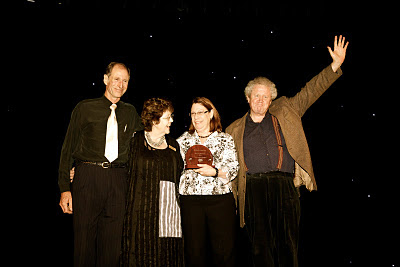 We were honoured by many tributes from speakers and delegates, including this touching dedication by Professor John Crawford who quoted Physicist Richard Feynman: “Here's to the crazy ones, the misfits, the rebels, the troublemakers, the round pegs in the square holes, the ones who see things differently. They're not fond of rules and they have no respect for the status quo. You can quote them, disagree with them, glorify or vilify them... about the only thing you can't do is ignore them, because they change things, they push the human race forward; and while some may see them as the crazy ones, we see genius, because the people who are crazy enough to think they can change the world are the ones who do." John then said: “When I first met the Kielys I thought they were crazy!” The night before, at the Conference Award Dinner, we were inducted into the Hall of Fame cum laude, with a standing ovation which was a very humbling experience. Our thanks to Master of Ceremonies Jeremy Bradley (crazy), John Crawford (also crazy) and everyone who contributed to or took part in Carbon Farming Week. You are all crazy!

Posted by Michael Kiely at 4:50 PM