Murray Darling mistakes still being made 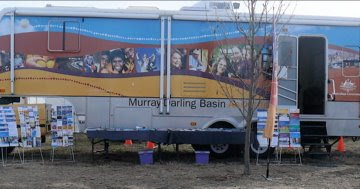 One of the biggest displays at the Mudgee Small Farm Field Days had “Murray Darling Basin” plastered all over it.
But hidden there at the end of the words, in orange, was the word "Assistance". It was a Centrelink display – helping farmers leave the land because the river system is dying. It was a powerful symbol of our ability and willingness as a nation to care for our country.
Over the years, practical, reasonable men in suits made practical, reasonable decisions about the Murray Darling River system that have destroyed it. Now the men in suits (and the occasional power-dressed woman) make practical, reasonable, unemotional decisions about Climate Change. “Put it off… Wait… Don’t act now…”
The people in suits are saying: “Agriculture is better off out of the Emissions Trading Scheme. Let’s wait until they sort out the issues.”
We have known about on-farm emissions and soil carbon since the early 1990s. Why, more than a decade later, are we saying “we need more data?”
‘We can’t measure emissions accurately.” That we are paralysed by our inability to fit into a neat accounting system designed by the UN should scare anyone who vaguely believes that Governments can protect us.
The longer soil carbon is ignored and sidelined, the faster the natural resource base slips away. The decisions being made about it are not scientific decisions; they are political decisions. If they truly believed in the problem and in the solution, it would take an act of political will (leadership) to activate the solution.
If soil carbon measurement was an Olympic event, we’d be world champions.
Posted by Michael Kiely at 6:50 AM