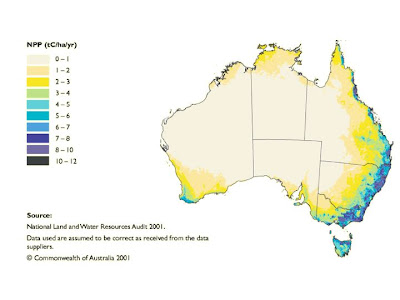 "Australian landscapes now store twice as much carbon in soil and plants as they did under natural conditions." What? Twice as much as when Captain Cook arrived?

No, this is not a statement by a lunatic fringe organisation. It is taken from A summary of the National Land and Water Resources Audit's Australian Agriculture Assessment 2001 (http://audit.ea.gov.au/ANRA/docs/summary_reports/ag_in_aust/_AA_04.html

Given that the Commonwealth Government's Australian Greenhouse Office believes Australian soils are generically incapable of storing much carbon, this assessment rings bells for the Carbon Coalition.

The reason behind the Audit's statement is fertiliser:

"Each year more than 5 million tonnes of fertilisers are added to agricultural soils. Use of nitrogenenous fertilisers has almost doubled since 1990. Fertilisers have boosted plant production and soil nutrient levels."

Given that nitrogenenous fertilisers are as major greenhouse gas emission source, the future of the fertiliser industry (and the carbon levels in the landscape) is questionable.
Posted by Michael Kiely at 8:04 AM