A SOLUTION TO THE STANDOFF AT COBAR 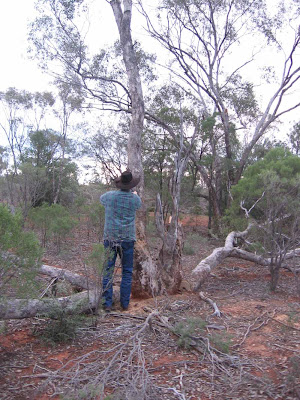 We can't support illegal clearing of vegetation, but we can't support the injustice done to Alastair McRobert from out near Cobar and Peter Spencer from the Cooma district and all the others. They have a right to compensation - the energy and coal industries expect and will get compensation for adjustment to climate change business conditions. We sent this letter to the unfortunate Phil Koperberg who must wonder what he walked into...

A Solution to the Cobar Standoff

I write on behalf of the Carbon Coalition Against Global Warming – a farmers’ and citizens’ movement dedicated to the creation of a market for soil carbon credits – to urge you and your Government to enter into serious negotiations with Alastair McRobert and his colleagues in the Commonwealth Property Protection Association.

INDUSTRY INEQUITY: The clearing of native vegetation is a source of greenhouse gas emissions which we should all, as a community, be seeking to avoid. But no industry - other than agriculture - is being asked to face the loss of income as a result of actions to reduce emissions. The polluting coal-fired energy industry is to be given compensation for losses, according to the Prime Minister’s Task Force on Carbon Trading. But there is no mention of compensation for us. No seat at the table, no consideration.

CLIMATE CHANGE COOPERATION: The Police pursuit of farmers seeking to assert their rights to just compensation is an indictment of your Government’s attitude to people who live west of the Divide. The current attempt to enforce poorly drafted legislation is alienating farmers from the responsibility we all have to address global warming. While Agriculture is the nation’s 2nd largest source of greenhouse gases, governments at all level must achieve collaboration. Your actions are not encouraging in this regard.

We are facing the most traumatic time our industry has ever faced: the never-ending drought is the first climate change natural disaster to hit a developed country. The soaring dollar is robbing us of income. The rest of the nation is on a spree while we cope with floods after drought. The adjustments farmers are being expected to make in the near future as part of the Australian Greenhouse Office’s plans - in areas such as water management, tillage, pasture management, methane emissions from animals and changes to fertilizer regimes – will put enormous strain on this industry. Already robbed of their livelihood by weather conditions, they are doubly afflicted by a Government that appears to want to kick us while we’re down.

MECHANISMS FOR JUST COMPENSATION: The State Government must immediately review the Native Vegetation Legislation with a view to introducing compensation for lost productive capacity. The Commonwealth Government must immediately review the Carbon Smart program which pays farmers for retain vegetation, and increase the amounts paid to meet the fair compensation level. Aspects of the program that make it unattractive and ineffectual are the prices paid and the 100 year rule (the trees must stand for 100 years). No farmer wants to tie up his land for 100 years. A 30 year rule would be closer to the mark as trees and soils can start capturing and holding CO2 immediately and can act as the important first aid for the atmosphere before emissions reduction technology comes on stream in 15-20 years. There should also be provision for a stewardship payment scheme to kick in after 30 years. We also see grounds for suspending the “Additionality” Rule which refuses to pay credits for land management changes that are deemed part of ‘business as usual’. This will block many farmers who have already made the move from till to no till cropping.

SOIL CARBON CAPTURE AND STORAGE: The Commonwealth Government must further encourage farmers to play their part in emissions reduction by making baseline soil carbon testing available free and incentivising farmers to use it. As well, to start the urgent process of capturing and storing CO2 via photosynthesis and rootmass exudation into soil, the Commonwealth Government should immediately sanction the trade in soil carbon credits on the voluntary market as a prelude to trade on the mandatory market with full value transactions based on accurate measurement methods which already exist, contrary to the misinformation in government circles.

Only when farmers are rewarded adequately for their efforts to protect the community from greenhouse gas emissions and regenerate the landscape by “carbon farming” techniques (methods that increase carbon sequestration in vegetation and soils), only then will they believe governments are fair dinkum and only then will they get behind the effort we all must make to tackle climate change.

END THE HARASSMENT: Finally, your Government must put an end to the harassment of farmers by extremist who give the environment a bad name. Relying on the goodwill and good nature of country people, these city people - who are not being asked to sacrifice their income for the greater good, and who have no understanding or compassion for the suffering of their fellow man, (they care more for a wombat than a fellow human being) and who foolishly think the nation would be better off without agriculture – believe they have the right to spy on our activities in a way that must surely contravene the Privacy Act.

Global Warming requires an immediate response from a united people. While your actions and the inequity of the legislation are marginalizing and alienating a large section of the community, you stand against effective action on Climate Change.

Therefore, this, we humbly submit, is the way forward:

2. Immediate negotiations between State and Federal Government on the funding of compensation packages for farmers to forego clearing invasive scrub from productive land.
a. Revamping CarbonSmart program
b. Ending the 100 Year Rule.
c. Dispensing with the Additionality Rule.

3. Immediate sanctioning of sale of farm soil credits on voluntary carbon markets in Australia and the USA.

4. Immediate introduction of free soil carbon baseline testing for all farmers, with financial incentives to measure their soil carbon levels and use them as a means of tracking their performance in capturing and storing greenhouse gases.

5. In future, all government committees and task forces preparing recommendations that will affect farm operations must have at least half the members having lived and worked on a rural enterprise.

Thank you for your attention.