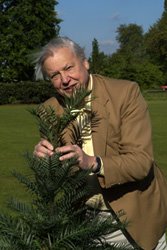 "I was sceptical about climate change. I was cautious about crying wolf. . . . But I'm no longer sceptical," said David Attenborough in an article in British newspaper The Independent. "Now I do not have any doubt at all. I think climate change is the major challenge facing the world. I have waited until the proof was conclusive that it was humanity changing the climate. The thing that really convinced me was the graphs connecting the increase of carbon dioxide in the environment and the rise in temperature, with the growth of human population and industrialisation. The coincidence of the curves made it perfectly clear we have left the period of natural climatic oscillation behind and have begun on a steep curve, in terms of temperature rise, beyond anything in terms of increases that we have seen over many thousands of years."
Posted by Michael Kiely at 2:54 PM