Beef and dairy producers for the chop

THE CARBON COPS SAY EVERYONE SHOULD STOP EATING BEEF TO REDUCE GREENHOUSE GAS EMISSIONS. THE EU AND BRITISH GOVERNMENT AGREES. AND NO ONE AT THE AUSTRALIAN GREENHOUSE OFFICE SEEMS TO UNDERSTAND MODERN FARM MANAGEMENT METHODS, YET THEY DESIGN SCIENTIFIC RESEARCH STUDIES BASED ON THEIR FLAWED UNDERSTANDING, GET THE RESULTS DICTATED BY THEIR FLAWED METHODOLOGY, MAKE FLAWED CONCLUSIONS BASED ON THEIR FLAWED RESULTS, AND POLITICIANS ACCEPT THEIR RECOMMENDATIONS AS THE WORD OF GOD. ARE WE DOWN THE RABBIT HOLE WITH ALICE IN WONDERLAND?

The Australian Greenhouse Office want Australia's cattle herd reduced. The British Government is planning to push people to become vegetarians. And the ABC is behind the same push. It all comes down to methane. Cows burping greenhouse gases.
The Carbon Cops have a "DID YOU KNOW?" section on their website which states: "If everyone in Australia were vegetarian and we didn't grow meat for export, we'd cut our emissions by around 54 million tonnes."
In the UK, the Guardian reports that the government unveiled a plan to introduce labels on all products, showing the greenhouse gas emissions created by their production, transport and eventual disposal, similar to the calorie count figures." The Guardian reveales that "an email by an official at the Environment Agency recently leaked to the vegetarian and vegan campaign group Viva showed that the government is also examining the various environmental impacts of the nation's diet. 'The potential benefits of a vegan diet in terms of climate impact could be very significant,' said the email, adding that recommending eating less meat as one of the 'key environmental behaviour changes' needed to save the planet was being considered." In a chilling burst of social engineering, the report concluded: "It also said that the change would have to be introduced "gently" because of "the risk of alienating the public".
According to a report published last year by the United Nations Food and Agriculture Organisation, the global livestock sector generates more greenhouse gas emissions than all forms of transport. It warned: "The environmental costs per unit of livestock production must be cut by one half, just to avoid the level of damage worsening beyond its present level." The key is that the livestock sector produces a much larger share of greenhouse gases that are more harmful than CO², such as nitrous oxide (296 times more impact than CO²) and methane (23 times more impact). "At the very least, people need to think about cutting down their meat and dairy consumption to help the environment," says Justin Kerswell, campaigns manager at the vegetarian campaign charity Viva. "The meat-based diet most people eat is completely unsustainable, but we are starting to see people make the shift. The amount of vegans in the UK has increased 10-fold in the past 10 years and is now around one million."
But research at Cardiff found that adopting a vegetarian diet would result in only a small reduction (5.9%) in footprint. The big winner will be chicken. "The least greenhouse gas-intensive meat is actually a battery chicken," says Tara Garnett from the Food Climate Research Network.
A 2005 study led by WWF Cymru put poultry at the top of the carbon-friendly meat list, followed by pork. Beef and veal were the most energy intensive meats. Lamb falls somewhere in the middle as sheep produce lots of methane. 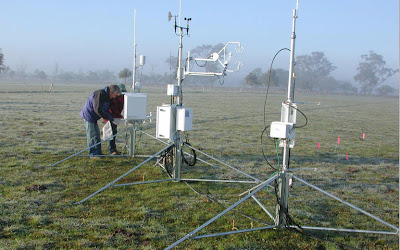 Finally you only have to look in the AGO's documents to see what is planned for Australian farmers: smaller herds: "An obvious management practice would be to run fewer animals, but to manage each animal to be more productive. By improving genetic and nutritional management, production can be maintained from a smaller herd," says Dr Richard Eckard, Program Manager Greenhouse in Agriculture CRC for Greenhouse Accounting. They also ping stocking numbers for nitrogen released as greenhouse gas: "Animal stocking rate – The higher the stocking rate the higher the volume of nitrogen deposited in dung and urine per unit area. Dung and urine are very inefficiently recycled in the soil plant system, with up to 60% of the nitrogen in a urine patch being lost to the environment. Higher stocking rate systems demand a higher nitrogen input regime (either fertiliser or imported feed) and thus result in a higher nitrogen content excreted in urine... A higher stocking rate also leads to greater pugging (hoof compaction) of the soil; pugged soils tend to be more anaerobic due to hoof compaction leading to higher nitrous oxide losses." THIS IS PLAINLY WRONG. UNDER GRAZING MANAGEMENT SYSTEMS STOCKING RATES CAN BE INCREASED BECAUSE THE LONGER REST PERIODS FOR THE PASTURE MEANS MORE VEGETATION IS GROWN, HENCE MORE FEED.

This is another example of glaring holes in the AGO's knowledge of the reality of modern farming. Under grazing management, higher stock numbers managed appropriately are better for pasture growth and sequestration. Peter Holter of Holistic Management International responded to the Guardian article: He suggests that, instead of reducing herd numbers, we aggressively work to change our methods of livestock management and allow animals to graze out on pastures in a controlled manner. With over two decades of experience, HMI has found that the benefits of controlled grazing are that:
1. Animals release their manure into the soil with more even distribution.
2. When animal hooves work the soil, manure is more quickly absorbed - increasing the soil’s organic matter, fertilizing it, and making it healthier.
3. A larger base of healthy soil absorbs more carbon dioxide, reduces the amounts of methane released into the atmosphere, and has a positive impact on global warming.
Grazing management practitioners are also dumbstruck that feedlot animals - according to the scientists - emit less methane than pasture fed animals.
This is becoming a very serious issue for landholders and the Carbon Coalition urges all graziers to join the fray. We must question the science, especially the methodologies, and talk some sense into the politicians. ALL ROTATIONAL GRAZIERS - HOLISTIC MANAGEMENT, GRAZING FOR PROFIT, ETC. - SHOULD WRITE TO THEIR MP AD THE MINISTER FOR LIGHT BULBS ALERTING THEM TO THE DANGEROUS DECISIONS OF THEIR SCIENTISTS.
Posted by Michael Kiely at 11:34 PM