Should agriculture be worried? 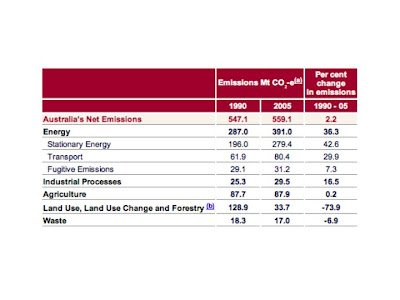 The NFF and others have begun special pleading for agriculture to avoid inclusion in an emissions measurement and capping.
But how can we expect to be taken seriously as a source of abatement offsets (carbon credits) if we are not also called to account as a source of emissions?

The latest emissions figures from the AGO indicate that Agriculture, while a major emitter, has stabilised its emissions and the Land, Land Use and Forestry has headed back in the other direction. The latter is largely forestry and bans on vegetation clearing activities. (Where this involves forcing farmers to stand by while their productive land is invaded by woody weeds parading as 'native vegetation', with no compensation, it is to be condemned. Dirty coal and dirty energy companies stand to be rewarded with large concessions under the Task Force Report.)

In fact it is direct coal and dirty energy which is the main problem. The numbers speak for themselves.

The PM's Task Force on Emissions Trading recommended that Agriculture be left out of the emissions trading scheme due to "the lack of reliable measurement methodologies at the farm level and the complexity and cost of verifying emissions".

What have the AGO been doing for the past 11 years compiling the National Carbon Accounting Register? The old chestnut that soil carbon is difficult to measure is dead and buried. How can the AGO report the chart above if it can't measure emissions? It defies logic. 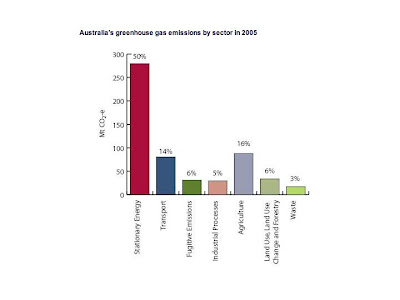 The Report continues: "The scope for new cost-effective regulation also appears to be limited. Land clearing – one of the key sources of emissions from the sector – has already been regulated in most states to achieve both improved natural resource management and greenhouse gas mitigation. There are few obvious additional regulatory options available." In other words, the farmers have already been belted. The Government is using the foregone clearing of vegetation as the basis for its boast that it will meet its Kyoto targets. The farmers involved were robbed of $10bn of carbon credits which the Federal Government cashed in. (The class action against the Government is covered extensively in agmates.blogspot.com)

Agriculture will be further protected from divide and rule tactics, the report suggests, by treating different sectors of the industry equally. "Proposals to cover only a subset of agricultural activities with alternative price or regulatory measures (say because practical measurement issues are resolved earlier) need to be carefully considered, given the potential for economic distortions to be introduced between related activities in the sector (for example, between intensive and extensive livestock, or between livestock and cropping). On the other hand, different agricultural activities and products have very different carbon profiles."

Land holders will need to be in control of their sequestration capabilities to use as trade offs when the carbon cops come calling. "There may be capacity for significant abatement in response to policy measures. The agricultural sector should be engaged to develop realistic options," says the Report.

"The main focus for the agricultural sector at this stage in emissions trading is to increase its capacity to achieve low-cost abatement, initially via the provision of offsets. This suggests the research effort should be enhanced to develop greater understanding of practical abatement opportunities for the sector, and to improve enterprise measurement of agricultural emissions." Which could mean anything, but we prefer to read it as research into the carbon sequestering capacities of soils to fill the gaps in the data sets of the existing NCAS reports.

While this sounds good for agriculture, there could be a stong in the tail. "Announcing the intention to include agriculture within the scheme on a defined timetable would provide an important incentive for research and development activities and their piloting at farm level. Early results from such efforts (before application of a price signal) would produce returns to the sector in the form of greater opportunities for the sale of offsets into the sectors covered by an emissions trading scheme."

The incomplete knowledge of the emissions portfolio of agricultural activities is revealing. Note the failure to include the major source of emissions: plowing and burning stubble:

"• Land use, land-use change and forestry emissions are the result of the burning of removed forest cover, the decay of unburnt vegetation, and emissions from soil disturbed in the process of land clearing. (These are offset to some extent by carbon sequestration due to regrowth of vegetation on previously cleared land.)"

On balance, then, agriculture faces what every other sector of the economy faces, sooner or later: not the end of the world, but the end of the world as we know it. Carbon Farming will be the dominant management style for the new Age of Carbon. (See www.carbonfarmersofaustralia.com.au)
Posted by Michael Kiely at 7:23 PM