Senate pleads with Bush: "Be a leader. Cap and Trade!" 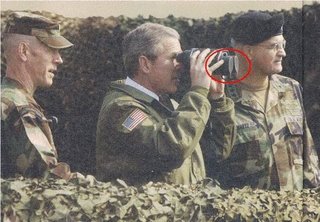 CAPTION: The US Senate says President George W. Bush is not a visionary when it comes to his country's future in a carbon-conscious world.

On 29 June, 40 US senators, including prominent Republican leaders, sent an urgent letter to President Bush. "Provide leadership on climate change," they said or the US could lose its competitive edge in a "carbon conscious" world. They want a mandatory cap and trade system whereby companies will have to buy carbon credits to offset the CO2 and other gases they are emitting into the atmosphere.

A year ago, the Senate passed a resolution calling for a mandatory federal programme to reverse global warming.
In other words, they wanted a cap and trade system. Nothing happened, so they are pleading with him again. Bush is a global warming skeptic. He has only recently agreed it is real. He doesn't accept its man made. (He career in the oil industry, one of the biggest polluters that would be forced to buy offsetting credits, has been offered as an explanation for his reluctance.) The Bush Administration's own scientists have proven climate change is linked to human influences.

The 40 Senators make an appeal on economic grounds: "It is important to keep US businesses competitive in a carbon-conscious global marketplace. Since we have not given them a clear signal to reduce global warming pollution, American businesses continue to make long-term capital investments that commit us to ever-increasing global warming emissions. Our inaction has discouraged the deployment of existing technologies and development of new technologies."
America will be a backwater, they warn, as "foreign companies are advancing innovative designs and patents in photovoltaics, auto technology, wind and efficient buildings".

"We urge you to provide leadership on this critical issue..."

Australian farmers are blocked from receiving full value for the carbon they sequester by the refusal of President Bush to mandate cap and trade and the way the Commonwealth Government in Australia takes its cues from the US.
Posted by Michael Kiely at 6:09 PM