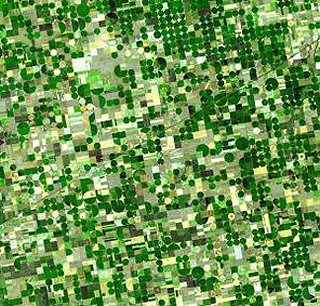 These are real crop circles in Kansas, photographed from satellite. This extract from a brochure from the Iowa Farm Bureau reveals that carbon measurement is not an issue is selling soil carbon credits in Kansas. Just grow certain crops or maintain 100% groundcover with grassland:

"Exchange Soil Offsets (XSOs): To be eligible, the land enrolled in the XSO certification program must be capable of being cropped – that is, the land could be utilized for row crop or small grain production even though it may currently be in a harvested grass or forage crop. If such lands are farmed with row crops during the project period, such crops need to be produced in a compliant no-till manner.
Cropland that was put into CRP prior to Jan 1, 1999 will NOT be eligible for XSOs. Cropland that is in a harvested hay crop as
part of a crop rotation is eligible.
XSOs will be issued at the rate of 0.5 metric tons CO2 equivalent per acre per year to farmers (in CCX Zone A) who commit to
continuous conservation tillage (defined as continuous no-till, strip till or ridge till) on the enrolled land from 2006 through 2010. Enrolled acres may be planted in soybeans no more than three of the five years (2006-2010). XSOs will also be issued to farmers who commit to maintain soil carbon storage realized as a result of establishment of grass cover plantings on eligible land (land that is capable of being cropped) that were undertaken on or after January 1, 1999. The land must remain in permanent grass cover through 2010. XSOs for these recent grass cover plantings will be issued at a rate of 0.75 metric tons CO2 equivalent per acre per year.
In the event that the land fails to meet these requirements, all XSOs from such land shall be null and void and any payments for XSOs delivered prior to January 1, 2011 shall be repaid subject to interest and penalties as provided in the sales agreement.